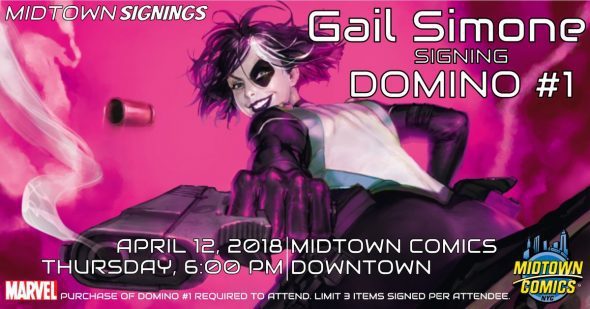 Writer Gail Simone appears at Midtown Comics Downtown on Thursday, April 12th to celebrate the launch of her brand new Marvel Comics series, Domino #1! This is an open signing and we recommend showing up early, just to be safe. Purchase of Domino #1 is mandatory, you may get up to 3 items signed. See you there!

Impossible curves. Impossible shots. Impossible targets. Marvel’s top soldier of fortune is back in an explosive new ongoing series! The product of a failed super-soldier program, Neena Thurman always made her own luck as the sharpshooting mercenary known as Domino, but what happens when her own powers over luck betray her? The hunter becomes the hunted as every mercenary in the game smells blood in the water! Domino gets her first ongoing series and is joined by a beloved pair of fantastic characters as Gail Simone returns to Marvel for Domino #1, with the art of David Baldeon.