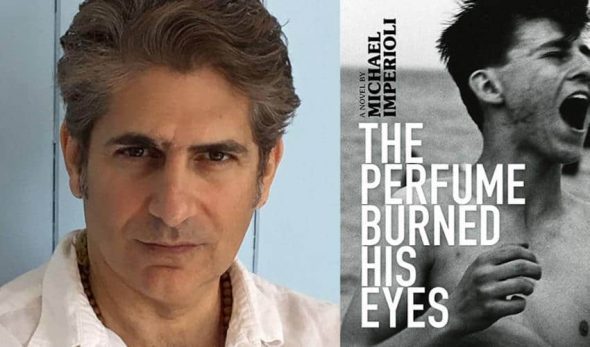 Book Soup and the City of West Hollywood’s WeHo Reads program present Michael Imperioli (The Sopranos, Mad Dogs, Goodfellas) in conversation with author Mark Haskell Smith at the West Hollywood Library on **NEW DATE** Wednesday, May 23, 2018 at 7:00 PM to discuss and sign his debut novel, The Perfume Burned His Eyes. Get tickets here…

Matthew is a sixteen-year-old living in Jackson Heights, Queens, in 1976. After he loses his two most important male role models, his father and grandfather, his mother uses her inheritance to uproot Matthew and herself to a posh apartment building in Manhattan. Although only three miles away from his boyhood home, “the city” is a completely new and strange world to Matthew. Matthew soon befriends (and becomes a quasi-assistant to) Lou Reed, who lives with his transgender girlfriend Rachel in the same building. The drug-addled, artistic/shamanic musician eventually becomes an unorthodox father figure to Matthew, who finds himself head over heels for the mysterious Veronica, a wise-beyond-her-years girl he meets at his new school. Written from the point of view of Matthew at age eighteen, two years after the story begins, the novel concludes with an epilogue in the year 2013, three days after Lou Reed’s death, with Matthew in his fifties.