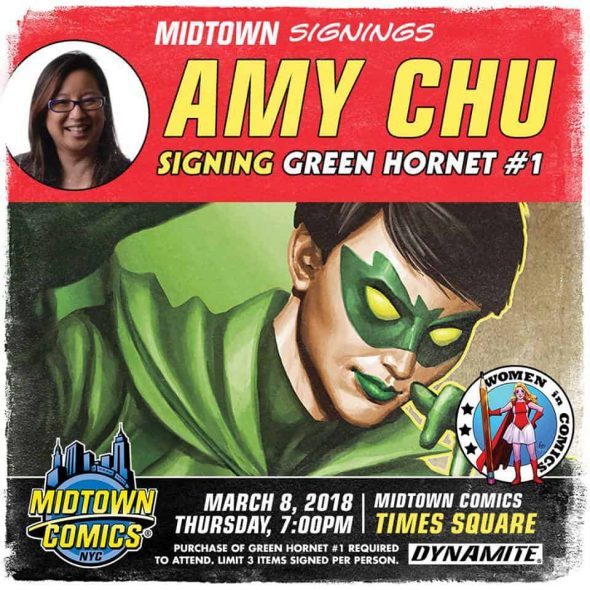 Writer Amy Chu (Red Sonja, KISS, Poison Ivy, Sensation Comics, X-O Manowar) appears at Midtown Comics Times Square on Thursday March 8th at 7:00 PM to celebrate the release of Green Hornet #1! This is an OPEN signing and we recommend showing up early, just to be safe. Purchase of Green Hornet #1 is mandatory; you may get up to 3 items signed. See you there!

Britt Reid Jr., the head of the Daily Sentinel publishing empire, vanished during a wild party on his friend’s yacht! Shortly after, crime spikes in the streets of Century City as Reid’s mysterious vigilante alter-ego, the Green Hornet, similarly disappears. It’s only a matter of time before his secret is out! Now, it’s up to Kato and his daughter to protect the city and the legacy of his former partner! But when Kato and Mulan uncover the secret behind Britt’s disappearance, their quest will become something they never imagined! Writer Amy Chu and artist German Erramouspe pick up where Kevin Smith left off, with action-packed mystery in Green Hornet #1!

NYC – Bobby Digital and The Pit of Snakes Launch Party