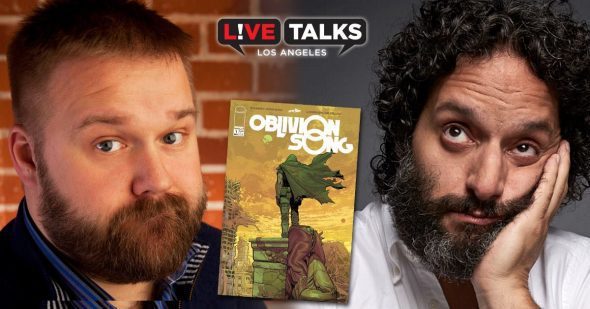 *All tickets include a signed copy of the inaugural issue of Kirkman’s new comic book series, Oblivion Song

Robert Kirkman is creator, writer and executive producer of The Walking Dead on AMC TV and Outcast on Cinemax. He is also a successful creator of independent comics. He created and continues to write the long-running Image Comics title The Walking Dead, on which the show is based, and the comics have been gaining popularity throughout its run. He also writes the acclaimed and equally long-running super-hero comic Invincible, which he created with Cory Walker, and the all-ages comic Super Dinosaur, which he created with Jason Howard

Oblivion Song is a unique take on the sci-fi genre that lives somewhere in between being less depressing than Kirkman’s The Walking Dead but not as fun as his second-longest running book, Invincible, when it’s at its most fun. Oblivion Song follows an agent, Nathan Cole, who goes into another dimension, Oblivion, to find people who have been left behind. With limited resources and equipment coupled with government abandonment, Nathan’s mission to save those left behind in Oblivion is even more challenging. A decade ago 300,000 citizens of Philadelphia were suddenly lost in Oblivion. The government made every attempt to recover them but after many years they gave up. Nathan Cole won’t. He makes daily trips, risking his life to try and rescue those lost, alone and afraid, living in the apocalyptic hellscape of Oblivion. But maybe… Nathan is looking for something else? Why can’t he resist the siren call of the Oblivion Song?

Oblivion Song is co-created by Kirkman (writer) and Lorenzo De Felici (artist). Other credits include Annalisa Leoni (colorist); Rus Wooton (letterer) and Sean Mackiewicz (editor), and is published by Image Comics for Skybound Entertainment. The first issue will be released on March 7 and will be an ongoing series.

Details and tickets available at the link…