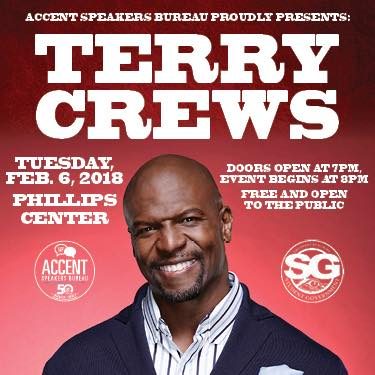 Actor/activist Terry Crews will speak on Tuesday, February 6, at the Curtis M. Phillips Center for the Performing Arts at an event hosted by ACCENT Speakers Bureau. Doors will open at 7:00 PM and the speaking engagement will begin at 8:00 PM.

Students with a valid UFID may pick up a maximum of two tickets free of charge from the ACCENT office on the third floor of the Reitz Union on Monday, February 5th between the hours of 12:00 PM and 5:00 PM. If any tickets remain, they will be made available to the general public at the Phillips Center Box Office at 12:00 PM the following day.

Terry Crews is best known for his impressive resume in film and television. His film work includes the #1 Netflix movie of all time “The Ridiculous Six”, “The Expendables” franchise, “White Chicks” and “Idiocracy”. His success in television can be seen through his work in the Golden Globe award-winning series “Brooklyn Nine-Nine” and “Everybody Hates Chris”. Crews was the face of the game show “Who Wants to be a Millionaire” and the hit Fox series “World’s Funniest.”

Before Crews starred in movies and television, he played football in the NFL with the Los Angeles Rams, San Diego Chargers, Washington Redskins, and Philadelphia Eagles. When he attended high school in Flint, Michigan, Crews received an Art Excellence scholarship to Western Michigan University scholarship before playing football for them, eventually leading the Broncos to a Mid-Atlantic Conference Championship in 1988.

But behind the brawn and laughs is a true renaissance man who got his first big break as a teen when he received an art scholarship to the prestigious Interlochen Center for the Arts in Michigan. He has applied his arts skill set to multiple passions, including a furniture line with Bernhardt Designs and writing his autobiography “Manhood,” which received critical acclaim.

The husband of 28 years and father of five commits his time off-screen to the non-profit The Polaris Project, a leading organization in the fight against human trafficking and modern-day slavery. For his tireless dedication to the organization, he was awarded the UN Global Generation Award in 2015.