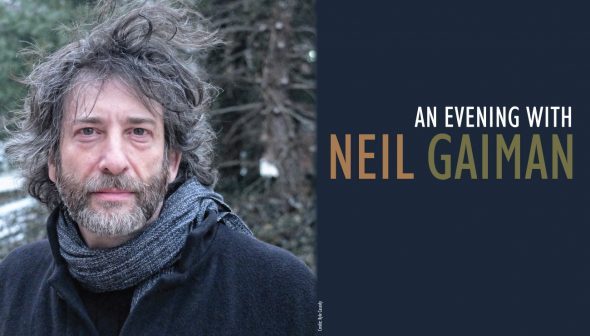 Author Neil Gaiman appears at the KeyBank State Theatre on Friday, March 9, 2018 at 8:00 PM! Tickets available at the link…

“I make things up and write them down” is the way Neil Gaiman describes his varied art. Today, as one of the most celebrated, bestselling writers of our time, his popular and critically acclaimed works bend genres while reaching audiences of all ages. In his live event, “An Evening with Neil Gaiman” he will tell stories and read stories, answer questions, and in his own words “amaze, befuddle and generally delight. It will be fun and odd and not like any other evening with Neil Gaiman.”

Gaiman is the #1 New York Times bestselling author of more than twenty books. Gaiman’s best-selling contemporary fantasy novel, American Gods, took the Hugo, Nebula, Bram Stoker, and Locus awards-as did his bestselling young adult story, Coraline. Another children’s novel, The Graveyard Book, is the only work to win both the Newbery (US) and Carnegie (UK) Medals – awarded by librarians for the most prestigious contribution to children’s literature. Gaiman’s groundbreaking Sandman comics, which has garnered a large number of accolades including nine Eisner Awards, was described by Stephen King as having turned graphic novels into “art.” Hailed by the Los Angeles Times as the greatest epic in the history of the form, an issue of Sandman was the first comic book to receive literary recognition, the World Fantasy Award for Best Short Story.