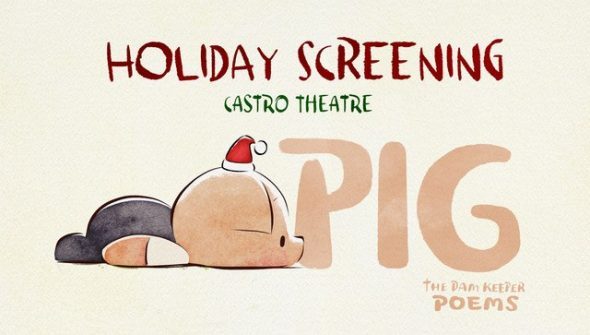 Join SFFILM Education and Academy Award nominated animation studio Tonko House on Sunday, December 10, 2017 at 10:00 AM for a special Bay Area premiere screening of their newest work PIG: The Dam Keeper Poems, and a book signing of their debut graphic novel The Dam Keeper. Since 2014, SFFILM Education has been proud to support and showcase the beautiful filmmaking and storytelling from this local treasure of the independent animation community, founded by former Pixar art directors Robert Kondo and Dice Tsutsumi. This event, perfect for educators, families (with children ages 5 and up), and fans of independent animation will feature a screening of the new work, a Q & A and behind the scenes peek into the making of the series with a live drawing demo, and a meet & greet session where attendees will have an opportunity to get autographs and photos with our guests. Just in time for the holidays and last minute present buying, Tonko House will also have a number of unique items for sale, including their brand new graphic novel, written and illustrated by Robert and Dice. All children in attendance will also be eligible for a free raffle of a few special items, including a signed drawing from Erick Oh.

In Tonko House’s first short-form series, written and directed by Erick Oh, we see how Pig remembers becoming the Dam Keeper. Seen through Pig’s youthful perspective, the visuals are abstract and surreal, but the source of his pain and his joy are clear. Produced in both Berkeley and Tokyo by a variety of international and domestic artists, the series showcases Tonko House’s global community through a story featuring universal themes, such as family, grief, responsibility, and growing up. The series is made up of over 31,000 frames, all individually hand drawn and painted.

Space is limited, so click here to reserve your FREE ticket today…