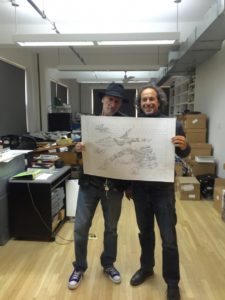 The original art of legendary creator Frank Miller, the man behind The Dark Knight Returns, Sin City, 300, Daredevil, Ronin and Wolverine will be for sale at the Metropolis Gallery booth at the Big Apple Comic Con, March 11-12 in New York City.

“I have been a big fan of Frank’s work going all the way back to Daredevil and I’m thrilled to represent Frank Miller at Big Apple! He is one of the most influential artists of the last 40 years. I am not just talking about in the world of comic books. I mean in the world. His comic art and stories have influenced generations, including writers, painters, set designers, comic creators, and filmmakers,” exclaimed Metropolis Gallery curator Vincent Zurzolo.

Frank will be signing at the convention on Sunday, March 12th. Big Apple Comic Con promoter Michael Carbonaro had this to say, “I’ve been in the comic business for over forty years and love comics with all my heart. I wanted to give the fans the best comic con they could ask for. Having Frank Miller at the con as well as the legendary Stan Lee fortify this con as the must attend event of the year!”