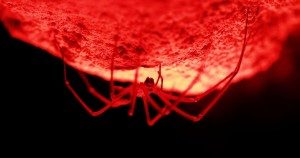 The Jean Cocteau Cinema will host the premiere of Sixteen Legs, a film by Bookend Trust that features Neil Gaiman, author of Sandman and Neverwhere, on Monday, October 3rd at 7:00 PM. Neil and the film creators from Bookend Trust will be at the Cocteau to answer questions! There will also be a fantastic exhibition of spider replicas, sculptures of egg sacs, and much more. Tickets are $15.00 and will be available soon!

Giant prehistoric spiders the size of dinner plates try to find love in the dark. As the world rapidly descends into the next period of global mass extinction, a message of hope comes from an unlikely hero: a creature, often reviled, that has survived previous mass extinctions and climatic change in a magical ecosystem hidden beneath one of the world’s last great wildernesses. With spectacular imagery and a dark-fantasy twist, this is a real-world “Charlotte’s Web,” capitalizing on master storyteller Neil Gaiman’s global popularity to take a story of stability and solitude into our world of rapid change.

This is a never-before-told story of a weird underground world dominated by the love-lives of giant prehistoric spiders the size of dinner plates.

These are still-living prehistoric animals that outlasted the dinosaurs, survived the splitting of the continents, and have endured the entirety of human civilization within some of Australia’s largest and deepest caves. These animals were the first web-spinners on the planet and are at the apex of this extraordinary ecosystem, which in turns influences the wilderness above them.

The documentary has exclusive access to deep research with a global scientific pedigree. The 25th anniversary of research on these giant animals reveals that they break the rules compared to their surface cousins: they have a very unusual mating strategy that allows the males to survive in the dark, their young take 9 months to emerge from the egg-sacs (instead of 6-8 weeks), they have structurally and chemically unique egg structures to allow the eggs and young to develop for so long, and the adult spiders live for decades (instead of 2-3 years).

This story is told from one of the world’s last great wildernesses, a visually stunning and unbelievably beautiful landscape that meets the highest number of criteria for World Heritage Listing of anywhere on the planet.

Filming has been undertaken in some of Australia’s deepest and most spectacular caves. These are ‘Restricted Access’, which means they are not open to the public or media due to the high conservation value of the caves themselves, and the fact that only the most experienced cavers can safely access them (only 72 people are allowed access per year). We have been granted exclusive filming access on the basis of our long history of cave research, and our proven capacity to work in highly fragile and dangerous underground environments. No one else will be able to capture this footage.

The footage has been captured over 4 years in 4K and 5K resolution.

This is a real-life tale of deep science told with a dark fairytale twist by master storyteller and best-selling international author Neil Gaiman (Doctor Who, Coraline). The celebrity and pop-culture appeal of the project is increased with atmospheric vocals from chart-topping Australian singer Kate Miller-Heidke and contributions from Stephen Fry, Tara Moss, Mark Gatiss, Adam Hills, and Polly Adams (daughter of Douglas Adams – author of ‘Hitchhiker’s Guide to the Galaxy’ and ‘Last Chance to See’).

Alongside our work with UTAS, ground-breaking input has also been added from scientific teams in New Zealand, the USA, the UK, Europe and South America – including experts from Oxford University (UK), Cornell University (US) and the American Museum of Natural History discussing an upheaval (“a paradigm shift”) in the previously understood pattern of global spider evolution. This information has been given exclusively to us for the documentary. At a time when we are bombarded by messages of doom and gloom, this is an antidote to excite and inspire modern audiences with the joy of the natural world.