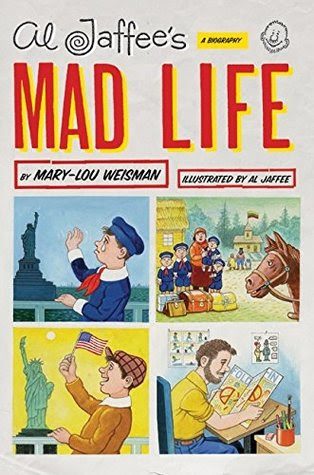 Al Jaffee, MAD Magazine cartoonist and creator of the celebrated fold-in cover, is a Guinness World Record holder with the longest career of a comics artist (over 73 years!). His early career was spent as an artist for Timely Comics and Atlas Comics, and later again working for Stan Lee again as an editor on Timely’s humor and teenage comics, including the Patsy Walker titles. His syndicated strip, Tall Tales, was collected and published by Abrams in 2008, winning the 2009 Harvey Award for Best Cartoonist and the Special Award for Humor in Comics. After time spent at MAD Magazine, he followed Harvey Kurtzman to Trump and Humbug, the former of which was recently collected and reprinted by Dark Horse. After both efforts folded, Jaffee returned to MAD Magazine, where he continues to provide fold-in covers to this day.

His work can be most recently be found in Tall Tales from Abrams (2008), the MAD Fold-In Collection 1964-2010 from Chronicle Books (2011) and Al Jaffee’s Mad Life by Mary-Lou Weisman (and illustrations by Al Jaffee) from HarperCollins (2010).

Al has received numerous awards that celebrate his long career. He was inducted into the Society of Illustrators Hall of Fame in 2014, and the Will Eisner Hall of Fame in 2013. He has received the Reuben Award from the National Cartoonists Society in 2008 as well as their Humor Comic Book Award in 1979. He was also Best Cartoonist in 2001 for his work on MAD Magazine. He has received the Sergio Award from the Comic Art Professional Society and the Inkpot Award at the San Diego Comic-Con.

“This is such a huge honor,” said Marc Nathan, promoter of the Baltimore Comic-Con. “Not only to have such a giant among giants of the comics field at the show, but to be able to celebrate his storied career and contributions to the industry at the Harvey Awards ceremony. We’re exceptionally proud, and fans won’t want to miss his panel Saturday at the show!”

The Baltimore Comic-Con is celebrating its 17th year of bringing the comic book industry to the Baltimore and Washington D.C. area. For more information, please visit www.baltimorecomiccon.com.

About The Harvey Awards
The Harvey Awards are one of the comic book industry’s oldest and most respected awards. With a history of over 20 years, the last 11 in conjunction with the Baltimore Comic-Con, the Harveys recognize outstanding achievements in over 20 categories. They are the only industry awards nominated and selected by the full body of comic book professionals. For more information, please visit www.harveyawards.org.