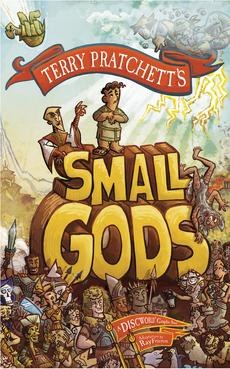 Ray Friesen will be signing Small Gods: The Discworld Graphic Novel at the Forbidden Planet London Megastore on Saturday 6th August from 4 – 5pm.

‘Just because you can’t explain it, doesn’t mean it’s a miracle.’

In the beginning was the Word. And the Word was: ‘Hey, you!’ This is the Discworld, after all, and religion is a controversial business. Everyone has their own opinion, and indeed their own gods, of every shape and size, and all elbowing for space at the top. In such a competitive environment, it’s certainly not helpful to be reduced to appearing in the form of a tortoise, a manifestation far below god-like status in anyone’s book.

In such instances, you need an acolyte, and fast: for the Great God Om, Brutha the novice is the Chosen One – or at least the only One available. He wants peace and justice and brotherly love. He also wants the Inquisition to stop torturing him now, please…

Ray Friesen, like Sir Terry, has facial hair and a penchant for hats, although he claims that this is a coincidence. Ray was nominated for the Ignatz Award for Most Promising New Talent during his first year of cartooning professionally.