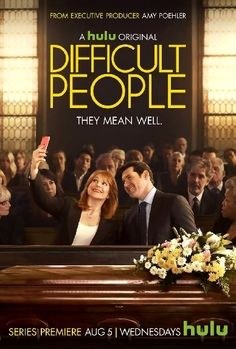 Two aspiring NYC comedians who aren’t living up to their potential, hate just about everything and everyone — except for each other.

That’s the hilarious journey of creator, writer, Executive Producer and star Julie Klausner (How Was Your Week?) and co-star Billy Eichner (Billy on the Street) on Hulu’s hit comedy series Difficult People. Laugh your way through an advance screening of an episode from Season 2, then hear from these two funny people about playing wayward versions of themselves on their painfully comic, Amy Poehler-produced show.

SF – Futurama Gets Knocked Up a Notch

SF – It Started as a Joke Screening + Q&A