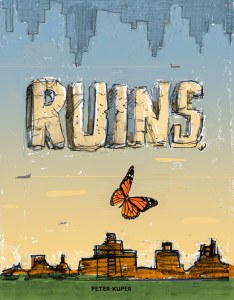 SCOTT EDER GALLERY is thrilled to announce a solo exhibition of work by Peter Kuper, spanning his prolific career as a cartoonist, author, and political illustrator.

Peter Kuper’s powerful illustrations and comics have appeared around the world in newspapers and magazines, including The New Yorker, Time, Newsweek, The New York Times, Liberation, The Nation, Vertigo (DC Comics), and MAD Magazine, where he has been writing and drawing “Spy vs. Spy,” the ironic – and iconic – wordless strip featuring dueling spies, since 1997. Noted for his politically and socially charged visual commentary, Kuper is also the co-founder of Dream of the Rarebit Fiend/ Blab!

Spy vs Spy / MAD Magazine World War 3 Illustrated, a political comix magazine, and has remained on its editorial board since 1979.

Peter Kuper has produced over two dozen books translated into French, Spanish, Portuguese, Greek, Hebrew and other languages. They include The System, Stop Forgetting To Remember, Sticks and Stones (which won The Society of Illustrators’ Gold Medal),

Newsweek cover and adaptations of many of Franz Kafka’s works including The Metamorphosis, which is used in high school and college curricula in the U.S. and abroad. He has also been teaching comics courses at The School of Visual Arts for over 25 years and is a visiting professor at Harvard University.

An inveterate traveler, Kuper has journeyed around the world with sketchbook in hand and the results include Comics Trips, a chronicle of his eight-month trip through Africa and Southeast Asia and Diario de Oaxaca, based on a two-year sabbatical Kuper spent with his wife and daughter living in Oaxaca, Mexico from 2006-2008. His most recent graphic novel, Ruins, is the culmination of his travel experiences, chronicling the migration of the Monarch butterfly interwoven with a couple’s journey to Mexico.