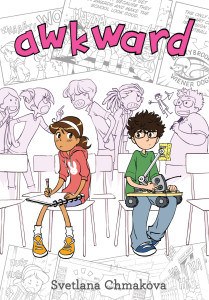 Little Island Comics and Page & Panel are proud to welcome author Svetlana Chmakova as she signs her new graphic novel Awkward! Perfect for fans of the work of Raina Telgemeier, like Smile, Sisters, or Drama, Awkward is a great middle grade graphic novel about the difficulty making friends outside of your social circle. It’s been one of Little Island Comics’ bestsellers since its release late last year, and we’re so thrilled that Svetlana will be back in Toronto so we can have an official signing with her!

Svetlana will be signing at Page & Panel, located in Toronto Reference Library, 789 Yonge Street, on Saturday, March 19th, from 1pm-3pm. Please stop by to get your copy of Awkward signed!

ABOUT:
Svetlana Chmakova broke onto the scene with the release of the popular graphic novel series DramaCon, published by Tokyopop. Since then she has created another original series, Nightschool, and adapted James Patterson’s Witch & Wizard series into a manga format, both for Yen Press/Hachette.