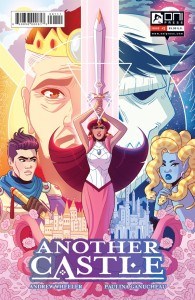 Page & Panel is proud to welcome Andrew Wheeler to the shop, to sign his very first comic, Another Castle, a new series from Oni Press! Wheeler will be in-store signing on the book’s release date, Wednesday March 2nd, from 6:00 – 8:00 PM.

You may have seen ANOTHER CASTLE previewed in the recent “Coming Soon” free preview that we’ve been giving away from our friends at Oni Press! You may not have known that the author of one of those stories was Torontonian, but, surprise! He is, and it’s his first comic, and wouldn’t it be nice for you to come say hello and support him at his launch? Also, the comic’s good, so that helps.

ANOTHER CASTLE is about a princess who decides to take control of her story, to save herself when captured, and fight for her kingdom and her freedom. If you’ve been enjoying books like Zodiac Starforce, Batgirl, Jem and the Holograms, Ms. Marvel, or Hellcat, we think you’ll probably want to give this one a shot