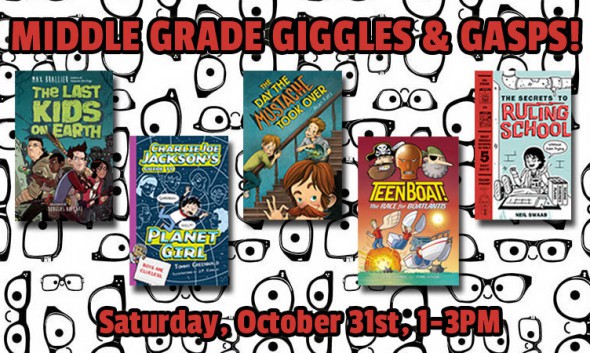 An afternoon of tales filled with laughs and adventure begins at 1:00 PM on Saturday, October 31st, as five hilarious authors stop by Books of Wonder for panel sure to have you in stitches. MAX BRALLIER debuts The Last Kids on Earth, a graphic novel told in a mixture of text and black-and-white illustrations about what happens with a monster apocalypse comes to town; TOMMY GREENWALD presents Charlie Joe Jackson’s Guide to Planet Girl, the story of how Charlie Joe Jackson finds a guidebook to Planet Girl and suddenly becomes his Middle School’s love doctor and Crimebiters #1: My Dog is Better Than Your Dog in which a young boy discovers that his new dog just might be a crime-fighting vampire!; ALAN KATZ shares The Day the Mustache Took Over, the tale of twin brothers who manage to scare off every babysitter, until they meet the mustached Martin Healey Discount, who proves that babysitters can make trouble, too; DAVE ROMAN brings book two in the Teen Boat! series, Teen Boat!: The Race for Boatlantis, an illustrated novel about the city Boatlantis, where being half boy/half boat is seen as a gift, not the curse Teen Boat always thought it was and the latest in his graphic novel adaptations of R.L. Stine’s classic Goosebumps, Slappy’s Tales of Horror; and NEIL SWAAB shines a light on his latest book, The Secrets to Ruling School (Without Even Trying), a story about and guide to surviving the first week of Middle School (i.e. The Worst Place in the Entire World).