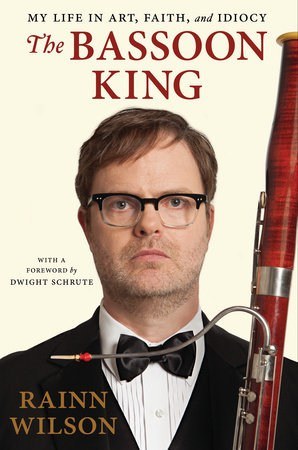 Rainn Wilson appears on Wednesday, November 11th at 7:30pm at The Wilbur Theater to present his new book The Bassoon King.

Rainn Wilson is best known for his Emmy-nominated role as Dwight Schrute on NBC’s The Office, though today he’s equally well-known for his millions of Twitter followers and the philosophy website he founded, SoulPancake, which launched a New York Times bestselling book of the same name. Now, in The Bassoon King he’s ready to tell his own story and explain how he came up with his incredibly unique sense of humor and perspective on life.

ABOUT THE BASSOON KING:

Rainn Wilson’s memoir about growing up geeky and finally finding his place in comedy, faith, and life.

For nine seasons Rainn Wilson played Dwight Schrute, everyone’s favorite work nemesis and beet farmer. Viewers of The Office fell in love with the character and grew to love the actor who played him even more. Rainn founded a website and media company, SoulPancake, that eventually became a bestselling book of the same name. He also started a hilarious Twitter feed (sample tweet: “I’m not on Facebook” is the new “I don’t even own a TV”) that now has more than four million followers.

Now, he’s ready to tell his own story and explain how he came up with his incredibly unique sense of humor and perspective on life. He explains how he grew up “bone-numbingly nerdy before there was even a modicum of cool attached to the word.” The Bassoon King chronicles his journey from nerd to drama geek (“the highest rung on the vast, pimply ladder of high school losers”), his years of mild debauchery and struggles as a young actor in New York, his many adventures and insights about The Office, and finally, Wilson’s achievement of success and satisfaction, both in his career and spiritually, reconnecting with the artistic and creative values of the Bahá’í faith he grew up in.