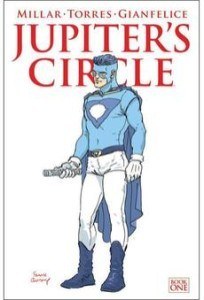 Mark Millar will be signing copies of Chrononauts Volume 1 and Jupiter’s Circle Volume 1 – both available as exclusive Forbidden Planet variants – at the Newcastle store on Saturday 10th October at 2:00pm.

Mark Millar is the award-winning writer/ creator of Wanted and Kick-Ass and worked as an executive producer on their subsequent movie adaptations. He is also the Creative Consultant for Twentieth Century Fox in Los Angeles, overseeing their upcoming Marvel movies. His ten years at Marvel produced Civil War, the biggest-selling series of the decade, and The Ultimates, credited by screen-writer Zak Penn as his inspiration for The Avengers movie. His Millarworld company has expanded in the last few years to include Kick-Ass 2, Hit-Girl, The Secret Service, Nemesis, War Heroes, American Jesus, Supercrooks and Superior. In 2012, he was awarded an honorary doctorate by Glasgow Caledonia University for his services to film and literature.