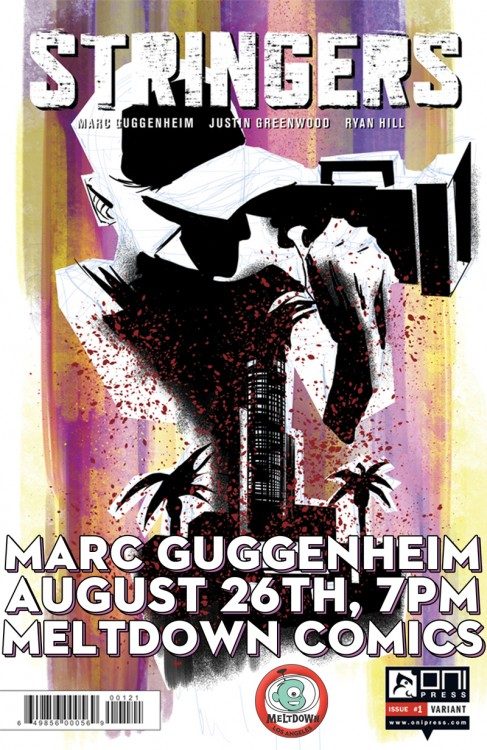 Guggenheim is the Executive Producer behind the CW’s ARROW, and mastermind behind the recently announced LEGENDS OF TOMORROW. When asked to describe his creator-owned passion project STRINGERS from Oni Press, Guggenheim stated:

“STRINGERS is based on a real life profession: Freelance videographers. Those car chases, shootouts, and fires you see on your local news? You can thank these “stringers” for ‘em.

One night in Los Angeles, two struggling stringers capture something on their camera that they shouldn’t have. And now our heroes have to survive an adrenaline-fueled night in Los Angeles with street gangs, crooked cops, and a rival stringer after their heads.”

This action-packed comic will span only five issues, with unique flip covers that form one cohesive panoramic view of Los Angeles, as well as a variant cover for each issue by such notable artists as Robbi Rodriguez (Spider-Gwen) and Tyler Crook (Harrow County).

About Oni Press
Oni Press has been Portland’s premier indie comic book publisher since 1997. Home to a range of rad comics including Scott Pilgrim, The Sixth Gun, Stumptown, Princess Ugg,Letter 44 and The Bunker, Oni Press strives to create comics for you.