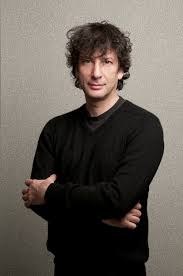 The Odessa Council for the Arts & Humanities, The Friends of the Ector County Library, The Education Foundation of Odessa, and the Odessa College Foundation are pleased to announce that author Neil Gaiman has been selected as the author for One Book Odessa 2015. Mr. Gaiman will appear at the Wagner Noël on May 20th, 2015 at 7pm. This event is free, but tickets are required (convenience charge may apply).

One Book Odessa 2015 book selection and schedule will be announced April 20th, 2015.

Tickets are free, but S/H charges may apply.

His most recent novel, The Ocean at the End of the Lane , was described by The Guardian as “a book that summons both the powerlessness and wonder of childhood, and the complicated landscape of memory and for getting.” It too was a #1 New York Times bestseller, and was voted Book of the Year in the British National Book Awards. Coraline was adapted as a musical by Stephin Merritt in 2009. Other works for younger readers include The Day I Swapped My Dad for Two Goldﬁsh (illustrated by longtime collaborator Dave McKean); The Wolves in the Walls (made into an opera by the Scottish National Theatre); Odd and the Frost Giants (written for 2009’s World Book Day, illustrated by Brett Helquist); and The Dangerous Alphabet (illustrated by Gris Grimly).

His most recent children’s book is Fortunately the Milk, another bestseller.

Gaiman has appeared as himself on The Simpsons and an episode of Arthur, and has written for the hit television series Babylon 5.

He has also penned screenplays for the original BBC TV series of Neverwhere; Dave McKean’s ﬁrst feature ﬁlm, Mirrormask, for the Jim Henson Company; and co-wrote (with Roger Avary) the script to Robert Zemeckis’s Beowulf. Other of Gaiman’s work has been adapted for ﬁlm, television, and radio, including Stardust (starring Robert DeNiro and Michelle Pfeiffer); Coraline (an Academy Award nominee and the BAFTA winner for Best Animated Film); Sandman (currently in development as a major motion picture); and American Gods (aforthcoming television series).