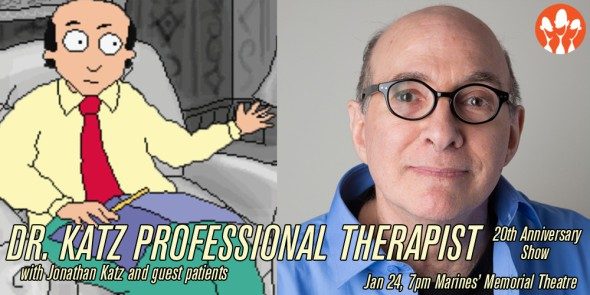 Dr. Katz Live is a stage variation of the animated show, “Dr. Katz: Professional Therapist,” created by Jonathan Katz and Tom Snyder for Comedy Central. It premiered twenty years ago in May of 1995, earning the network its first Emmy and Peabody awards and introducing the term “squigglevision” to the English language. The show has rightfully gone on to become a cult classic.

The live version (much like the cartoon version) of Dr. Katz, brings well-known standups to the good doctor’s couch, using the quirks and idiosyncrasies of their comedy acts to analyze their various conflicted issues. The stage version also finds Dr. Katz in therapy with his own shrink, Dr. Snyder. H. Jon Benjamin revives his role as Dr. Katz’s son, Ben. Guest patients for this special anniversary celebration include Ron Funches, Pete Holmes and Andy Kindler, with more surprise patients yet to be announced. $35 All Ages

Presented as part of SF Sketchfest!