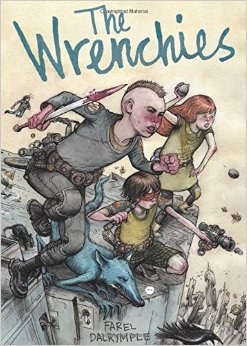 Farel Dalrymple presents The Wrenchies in conversation with Brian Heater of Boing Boing on Wednesday, September 17, 2014 at 7:30 PM at the Greenlight Bookstore!

Critically acclaimed cartoonist Farel Dalrymple (creator of Pop Gun War and collaborator with Jonathan Lethem on Omega the Unknown) brings his literary and artistic powers to bear in his new book The Wrenchies, a sprawling science fiction graphic novel about regret, obsession, and the uncertainty of growing up. In Dalrymple’s demented future, humans on a destroyed Earth are oppressed by the evil Shadowsmen, and only a gang of ruthless and powerful children called the Wrenchies can hope to stand against them. When Hollis, a lonely boy from our world, is magically given access to the future world of the Wrenchies, he finally finds a place he belongs. But it is not an easy world to live in, and Hollis’s quest is bigger than he ever dreamed. Dalrymple will present the book with a slideshow of images, and talk about his work with Brian Heater, who writes about comics for the technology and culture site Boing Boing.