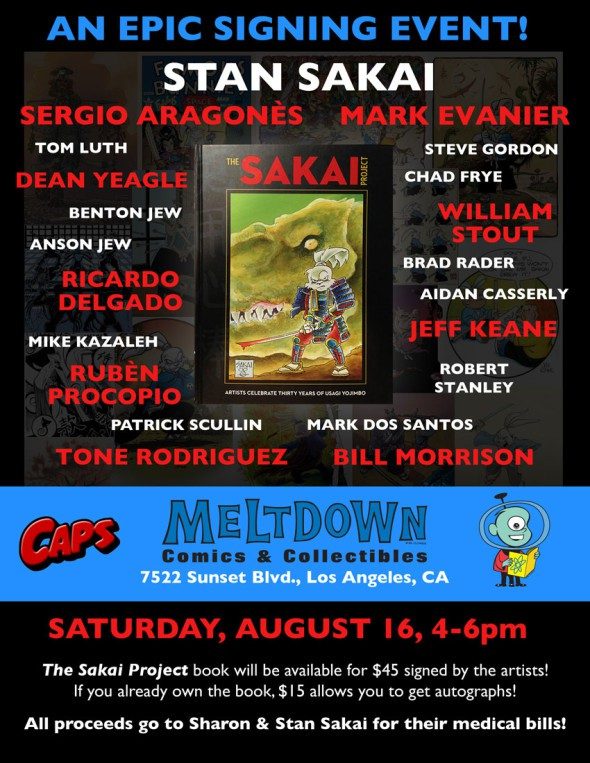 Fundraising efforts were initially spearheaded by the Comic Art Professional Society (CAPS), an organization of professional comic book artists and writers of which Stan Sakai is a member. Organized by artist Tone Rodriguez, CAPS began collecting original art last December for an online auction to lend a helping hand to Sakai, whose wife Sharon has been suffering from an inoperable brain tumor. As art poured in from the cartooning community, many pieces were custom drawings of Stan’s samurai rabbit creation Usagi Yojimbo.

Bill Morrison, a member of CAPS and an art director at Bongo Comics (publisher of “The Simpsons”), approached Sakai’s publisher, Dark Horse, about collecting these wonderful images into a book to also benefit the Sakais. Dark Horse publisher Mike Richardson was enthusiastic about the idea, and offered to pay for the book’s publication so that all sales could go to the Sakais. Bill Morrison proceeded to volunteer his time to edit the book in tandem with Dark Horse editor Randy Stradley which was designed voluntarily by noted book designer Serban Cristescu. The result is a beautiful 160-paged hardcover art book featuring interpretations of Usagi Yojimbo by some of the top cartoonists in comics today.

Between the online auction and the book, the cartooning community came together in a unique way to help one of their own. Now twenty-one artists local to Los Angeles will gather one more time to help their friend with a fundraising book signing event.

Books will be sold for $45 each, or if fans already have the book, they will be charged a nominal $15 to have their books signed by the artists in attendance.

In addition to “The Sakai Project” book, there will be limited edition prints available exclusively at the event of four images from the book by artists attending the signing: Sergio Aragonès, Stan Sakai, William Stout, and Bill Morrison.

The event will take place on August 16 from 4-6pm at Meltdown Comics & Collectibles, 7522 Sunset Blvd., Los Angeles, CA 90046. Thanks to Meltdown, all proceeds go to Sharon & Stan Sakai to help with their medical bills.