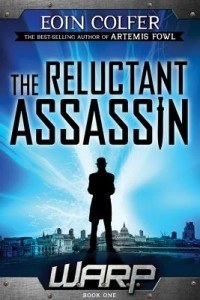 Bestselling Author of the Artemis Fowl series EOIN COLFER appears at BookPeople to speak and sign his new novel WARP: The Reluctant Assassin on Friday, April 11 at 6:00 PM!

Artemis Fowl fans, today is a big day! Eoin Colfer is returning to BookPeople to present the first book in his brand new series, Warp: The Reluctant Assassin. Riley, a teen orphan boy living in Victorian London, has had the misfortune of being apprenticed to Albert Garrick, an illusionist who uses his conjuring skills to gain access to victims’ dwellings. When an intended victim turns out to be a scientist from the future, Riley is unwittingly transported via wormhole to modern day London, followed closely by Garrick. He must return to Victorian London to save the world!
PLEASE READ:

The speaking portion of this event is free and open to the public.

Tickets are only required for the signing portion of the event.

Books & tickets are now available. Purchasing a book online automatically assigns you a ticket for the signing. There is no separate “ticket” item to add to your cart.

We are also taking orders for signed copies of Artemis Fowl The Last Guardian for those who cannot make it to the event. We ship all over the world.

Riley, a teen orphan boy living in Victorian London, has had the misfortune of being apprenticed to Albert Garrick, an illusionist who has fallen on difficult times and now uses his unique conjuring skills to gain access to victims’ dwellings. On one such escapade, Garrick brings his reluctant apprentice along and urges him to commit his first killing. Riley is saved from having to commit the grisly act when the intended victim turns out to be a scientist from the future, part of the FBI’s Witness Anonymous Relocation Program (WARP) Riley is unwittingly transported via wormhole to modern day London, followed closely by Garrick.

In modern London, Riley is helped by Chevron Savano, a nineteen-year-old FBI agent sent to London as punishment after a disastrous undercover, anti-terrorist operation in Los Angeles. Together Riley and Chevie must evade Garrick, who has been fundamentally altered by his trip through the wormhole. Garrick is now not only evil, but he also possesses all of the scientist’s knowledge. He is determined to track Riley down and use the timekey in Chevie’s possession to make his way back to Victorian London where he can literally change the world.

EOIN COLFER is a former elementary school teacher and the author of the bestselling Artemis Fowl series. He is also the author of Airman; Half Moon Investigations; The Supernaturalist; Eoin Colfer’s Legend of Spud Murphy and Legend of Captain Crow’s Teeth; and The Wish List. He lives in Ireland with his wife and two children.

Thank you for supporting Eoin Colfer & your local independent bookstore!