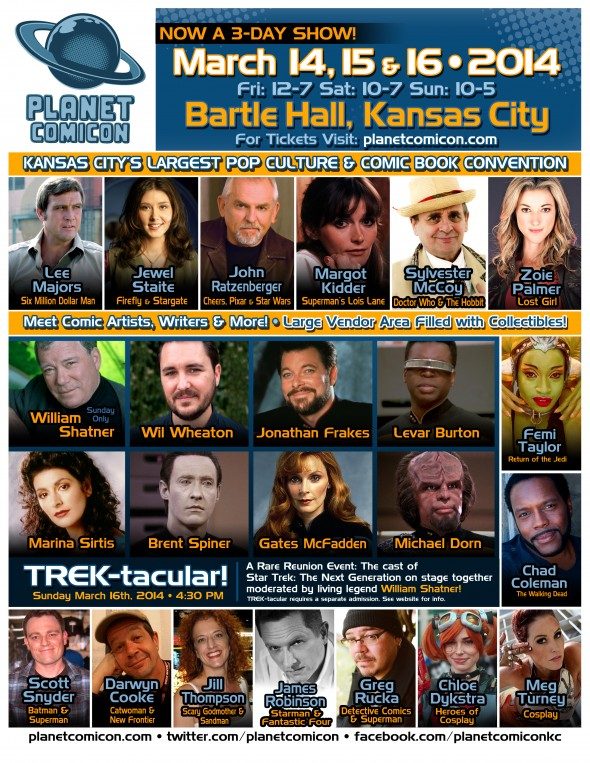 Planet Comicon 2014 will have more programming than ever before, with five rooms of events stretching over three days. This schedule is presented for your convenience. All events, panelists, and other details are subject to change.

Webcomics: Inside Out Who needs ink on paper? Join a discussion of what it takes to create comics magic on the web. ROOM 2502 (Lower level)

Michael Dorn & Marina Sirtis: ST:TNG’s Klingon and Betazoid stars take the stage to take you behind the scenes of one of the greatest science fiction series in history.ROOM 3501 (Upper level)

Craft Your Fandom: Cosplay from Concept to Completion: Join leading cosplay and prop-builder experts in a look at where to start making your favorite prop or costume. Featuring Abby DarkStar, Zen Dragon, and more to be announced. ROOM 2502 (Lower level)

Vampires Don’t Sparkle: That’s right…we said it! We want our meat eating, sunlight obliterating, butt-ugly vampires back! Bram Stoker would be doing cartwheels in his grave is he saw what vampires have become.  We are taking it back, today!!! ROOM 2503 (Lower level)

Kansas City Comics Creators: Kansas City has one of the most vibrant communities of comics creators. Jason Aaron and Ande Parks lead a panel of the local talent. ROOM 2505 (Lower level)

Wil Wheaton: He’s back! One of Planet Comicon’s favorite guests has returned. You know him from ST:TNG, The Big Bang Theory, Stand By Me, and much more. – ROOM 3501 (Upper level)

Bad Karma: Bad Karma is a creative collective, whose members include Alex Grecian, Jeremy Haun, B. Clay Moore, and Seth Peck. Their first joint project was Bad Karma Volume One featuring five original, creator owned concepts in self-contained stories. Meet the creators and listen as they answer questions about the Kickstarter process, the concept behind the book and what’s next for Bad Karma. ROOM 2502 (Lower level)

Khemia Creations: The Art of Stage Combat: Come join Khemia Creations as we display a series of stage combat sketches that can be easily adapted into stage or video skits! After each showcase fight, a thorough dissection of the combat choreography will be given so that you can learn how it’s done. ROOM 2503 (Lower level)

Sexuality in Cosplay: A frank discussion of the role of sexuality in cosplay featuring prominent cosplay personalities. May not be suitable for all audiences. Parental guidance suggested. ROOM 2502 (Lower level)

Comic Geeks – A Web Series – A screening of the Comic Geeks pilot, a new series debuting in 2014. The story follows three friends at various stages of comic geekery: Dan, the die-hard weekly shopper, Jeff, the indie-only cartoonist, and Brian, who struggles with reading comics and acting like an adult. Together, the three try to figure out what makes a comic geek, and how to be an adult doing it. ROOM 2503 (Lower level)

Crowdfunding – Kickstarter. Indygogo. Rockethub. What’s crowdfunding all about? How can creators like you use it to feed their creativity – any maybe event their families? ROOM 2504 (Lower level)

The Last Ride of Lee Salem, Editor of Calvin and Hobbes – Enjoy a Q & A with Lee Salem, the man who edited Calvin and Hobbes, For Better or For Worse, Doonesbury, The Far Side, Cathy, FoxTrot, The Boondocks, Cul De Sac, Lio and dozens of other comics. The industry icon is transitioning to the role of President Emeritus of Universal Uclick as of March 2014. He has a wealth of experience and stories that any comics fan and creator will find enlightening. Joining him will be those influenced by his work in the comics industry including Bill Amend, creator of Foxtrot. Plus, a there will be a reading of statements regarding his work provided by Bill Watterson (Calvin and Hobbes), Lynn Johnston (For Better or For Worse), Jan Eliot (Stone Soup), Richard Thompson (Cul De Sac) and Mark Tatulli (Lio). ROOM 2502 (Lower level)

Zero Budget Filmmaking – The internationally awarded Brass Engine Productions team will give you tips and tricks to make your film or series without spending a lot of cash. Come and get a Q&A with Director Ben Watkins, and watch clips from the production’s web series and other projects done on a shoestring budget. – ROOM 2503 (Lower level)

Researching Comics with the Grand Comics Database – Dive deep into comics and comics history! Leading members of the Grand Comics Database community will be discussing a bit of the history of the GCD and its roots in the early days of internet comics fandom, along with its current status and abilities in helping people research various comic books and comic book creators. – ROOM 2502 (Lower level)

Charlton Arrow – From the 40s thru the 80s, Charlton was the “other” comics publisher of  mystery, romance, and superhero titles. Join Paul Kupperberg and Rick Stasi, two of the creators of Charlton Arrow, for a trip down memory lane and an introduction to their new comics zine that celebrate some of Charlton’s lesser known creations. – ROOM 2503 (Lower level)

John Ratzenberger: He may be most famous as Cliff Clavin from Cheers, but John Ratzenberger‘s nerd movie cred is truly amazing. “It’s a little known fact” that his filmography includes Star Wars Episode V: The Empire Strikes Back, Superman: The Movie, Superman II, and every single Pixar movie ever made! – ROOM 2505 (Lower Level)

Heroic Prose: Genre Fiction – Kings of the Keyboard and Princesses of Prose! A panel of prodigious purveyors of thrilling novels and short fiction reveal the stories behind their stories. – ROOM 2502 (Lower level)

Zoie Palmer: A lively Q&A with one of the stars of the Syfy series Lost Girl. – ROOM 2505 (Lower Level)

Femi Taylor: The delightful Femi Taylor is best known for playing Jabba the Hutt’s Twi’lek slave dancer Oola in Star Wars Episode VI: Return of the Jedi. She is a Nigerian-born British dancer and actress who spent years training with the London Contemporary Dance Company and the Alvin Ailey American Dance Theater in New York. In addition to RotJ, she appeared in the original London cast of Andrew Lloyd Weber’s musical Cats! – ROOM 3501 (Upper level)

DC Universe: Best of the Best – A celebration of the best of DC Comics through the years, from the Golden Age to today. Join leading creators for a discussion of the DC Comics that inspired them! Moderated by long-time DC editor and writer Paul Kupperberg. – ROOM 2502 (Lower level)

Karate Chopping Robots & Killer Carnies: The Art and Science of Digital Comics and Games – Mobile-based comics and games are transforming the entertainment industry. Indie game and comic developers have more opportunity than ever before to make their mark and create some major waves. Join Kung Fu Robot creator Jason Bays and Burn the Lot co-creator Cameron Calder as they share their experiences in mobile-based interactive comic and game development. From concept to development to launch and beyond, these Kansas City-area veterans will offer their unique perspective to this exciting and ever-changing scene. – ROOM 2503 (Lower level)

Timey Wimey Puppet Show – Direct from the YouTube web series and packed appearances at DragonCon and Gallifrey One, we’re pleased to present  this family-friend Punch-and-Judy-inspired Doctor Who comedy puppet show.  The show is for all ages! – ROOM 2502 (Lower level)

Khemia Creations: Cosplay Photography and Modeling – Whether you’re in front of behind the camera, this is the panel for you! We will be discussing techniques on how to make your cosplay photography go from a snapshot to a work of art! For those with camera in hand, we’ll tell you how to make the most of your environments, angles, and lighting to ensure you can capture the best images at every convention. For those wanting to show off their costume creations, we’ll give beginner modeling tips to offer your best side to camera every time! – ROOM 2503 (Lower level)

So you want to build an R2 Unit – Come join us for the in’s and out’s of building your own R2D2 or other Astromech droid. We will give you an idea of what it skills are needed, and the resources available to help you on your journey. – ROOM 2504 (Lower level)

Eddie McClintock: Eddie McClintock is best-known for his role as Secret Service agent Pete Lattimer on the Syfy series Warehouse 13. But, the actor is also an artist, who was inspired to purse his passion by comic books. He says, “It all started with Herb Trimpe andThe Incredible Hulk.” Now is your chance to meet Pete Lattimer and learn the answers to your Eddie McClintock questions. – ROOM 2505 (Lower Level)

Lee Majors: The Six Million Dollar Man  – An actor of international importance, Lee Majors has  continually proven himself to be a favorite of audiences worldwide. Lee Majors’ performances and personas have made an indelible impact on television programs. From his initial role of Heath Barkley on The Big Valley to the Men From Shilo to Owen Marshall Counselor at Law to The Fall Guy and Raven. It was his starring role as Steve Austin on the overwhelmingly popular The Six Million Dollar Man that Lee became an icon and part of the American culture. – ROOM 3501 (Upper level)

How To Market Comic Strips Today – In previous decades, comic strips were the delicious and funny center of a reader’s daily dose of communication, placed in the middle of their newspapers and hearts. Today, comic strips and webcomics have enjoyed a strong renaissance in pop culture. How has this happened; how are cartoonists sharing their art and stories today? This panel will share the wide experiences of print, syndicated and web cartoonists alike. From viral marketing, presences at events such as San Diego Comic Con and Planet ComiCon, social media outreach, tours and more, we’ll hear from some of the engaging storytellers that are creating today. – ROOM 2502 (Lower level)

Star Wars in American Culture – Explore the influences and impact of the single most important film of the twentieth century. We will take a look at the many ways this pop culture phenomenon connects to our everyday lives. Presented by Dr. Bradley Will, Dr. Stephen Schleicher, and Dr. Scott Robson of Fort Hays State University. – ROOM 2503 (Lower level)

For the Love of Comics – What do you love about comics? Today’s top creators, including Jason Aaron, discuss the comics they love the most. Moderated by C.B. Cebulski. – ROOM 2505 (Lower level)

Concept Design for Comic Books – Comic and concept artist Steven Sanders has designed a number of characters and locations for Marvel Entertainment, among other companies. Using examples from Marvel, he’ll explain how concept design in comics is different than concept design in video games or film, and will show what is needed to make good designs for comics. – ROOM 2502 (Lower Level)

50 Years of GI Joe – the first action figure – A history of GI Joe, the world’s first action figure, from its beginnings 50 years ago in 1964, to the present day. We will discuss the evolution of the brand from a 12 inch everyman solider to a modern team of hundreds of small action figures, as well as several odd and interesting detours and off-shoots along the way. We also will cover the brand’s current fandom, including online resources and fan projects. – ROOM 2503 (Lower Level)

DMC: Comics and Hip Hop – As a founder of Run-D.M.C., Darryl “DMC” McDaniels is a pioneer of hip hop culture. Now he’s turned his creative passion to comics! Already a hero to his millions of fans around the world, DMC’s accomplishments read like a laundry list of musical and cultural accolades: Grammy nominated musician, multi-platinum recording artist, Rock-N-Roll Hall of Fame inductee and rap/rock pioneer who’s influenced music since the first time he’s ever touched a mic. Adding to his long lists of firsts, DMC is teaming up with some prominent fixtures in the comic book and music world to craft the first 100% authentic, unapologetic, indie, hip hop comic book. – ROOM 2505 (Lower level)

Planet Comicon is Kansas City’s largest comic book and pop culture convention. Now in its thirteenth year! The convention will be held at the Kansas City Convention Center on March 14-16th. Please visit their website for the full guestlist, ticket information, and more!