Mark Waid, an Eisner Award-winning American comic book writer, known for his work on Marvel Comics’ Captain America and David Lloyd, a British comics artist best known as the illustrator of the story V for Vendetta along with other renowned International personalities are coming to attend 4th Annual Indian Comics Convention

4th Annual Indian Comics Convention taking place at Capital’s Thyagraj Stadium (INA), from February 7–9, 2014 is going to be ticketed this year onwards; plans to expand the scope and size of events across India

Comic Con India has partnered with the Charles M Schulz Museum to bring a special Inside Peanuts: The Life and Art of Charles M. Schulz exhibit to India for the 4th Annual Indian Comic Con

International Pavilion: Some of the best International comics publishers are coming this year especially for Delhi’s 4th Annual Indian Comic Con.
Costume Play: Kids and adults can come dressed as their favourite comic, superhero and gaming characters. WIN A GOLDEN TICKET TO NEW YORK COMIC CONVENTION 2014!!!
Workshops: With creators, artists and writers of popular comics and graphic novels.
Book launches: Over 5 New titles to be launched!
Over 100 Participants: Featuring major Indian and International brands.
Merchandise from across the world: Lots and lots of merchandise! Pick up some awesome Merchandise, T-shirts, Mugs, Toys, Posters, Cushions etc, the list is endless!!
Sessions: With Leading Artists, Writers & Publishers from India & Abroad 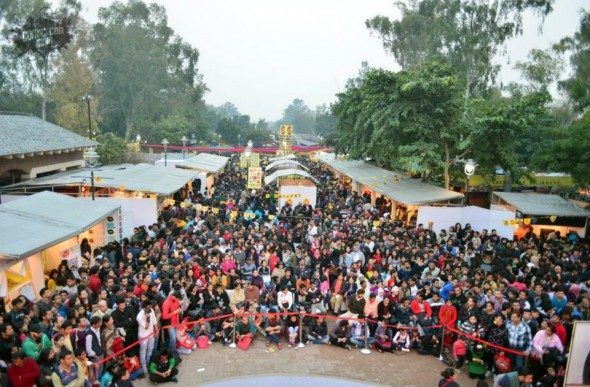 India, January 9, 2014 – An action packed 4th Annual Indian Comics Convention is all set to entertain Indian audience at Capital’s Thyagraj Stadium (INA), from February 7– 9, 2014 between 11am-7pm. With the aim to expand the scope and size of the events and make it sustainable across India, Comic Con India has decided to introduce nominal ticketing at all the events starting with the 4th Annual Indian Comics Convention.

There will be Shuttle services provided from INA & Delhi Haat Metro station for visitors. Spread across 50000 Sq foot of area, this year the comics convention will be divided into 3 zones – (i) Experience zone (ii) Exhibitor zone and (iii) Food court.

Comic Con India has partnered with the Charles M Schulz Museum to bring a special Inside Peanuts: The Life and Art of Charles M. Schulz exhibit to India for the 4th Annual Indian Comic Con – Delhi. This is going to be one of the major highlights of this convention. The exhibit shipped in exclusively for visitors at the convention takes the visitors through the journey of Peanuts & Charles M Schulz over the years. The exhibit starts off with Schulz’s life from his Minnesota roots and illuminates his creative process and work environment. It tracks the development of twelve main characters that make up the unique world of Peanuts. It also takes the visitor on a journey from the 1950’s to present day popularity and resonance of the Peanuts comic strip and the legacy of Charles M Schulz.

Cosplay (Costume Contest), one of the major attractions at Comic Con India, will continue to give assured prizes to everyone in costume. Under the 5 categories created to increase one’s chances of winning gifts. Each day, one winner will be chosen from each of five categories:

All 3 days, One lucky winner out of the chosen 5 will get the awesome chance to win A GOLDEN TICKET TO NEW YORK COMICS CONVENTION 2014, with a VIP ticket to the event!!

From this convention onwards, Comic Con India Awards which is an initiative of Comic Con India are going to take place during the main convention itself. CCI aims to recognize the work of all the professionals of India’s Comics Industry. It’s an attempt to bring into focus the novelty of this art form and acknowledge the efforts of numerous writers, artists & publishers in this field. The 3rd annual CCI Awards ceremony will be held at the venue on the first day of the convention, i.e. Friday 7th February 2014.

At the convention, there will also be some Awesome Anime & Manga Merch from Japanese Merchandiser IINE Toys, along with the best and most exclusive International merchandise at the convention from across the globe. Also, there will be exclusive Indian merchandisers including Kook N Keech by Myntra, Wacom, Collectors Heritage, Hysteria, Firki, Purple Sack, I Wear Me, Chimp, Chumbak, Keep Chilling, Superhero Toy Store, Funko, Super Hero Toy Store, Planet Superheroes and lots more!!

Comic Con India is dedicated to creating unique events and giving the fans, exhibitors and partners a platform to celebrate their undying love and passion for comics & pop culture. Comic Con India is dedicated to expanding India’s popular culture by creating high profile events that cater to fans of not only comics, but also, gaming, movies, television, merchandise, toys & more. 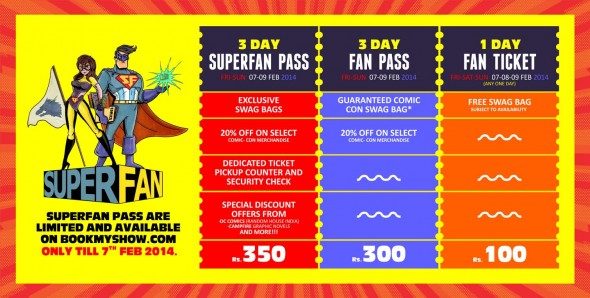 Jatin Varma, Founder, Comic Con India, shared, “We are kickstarting our 4th year in a big way by revamping our entire event, adding more exhibitors and content. There will be a lot more for the visitors to do at the event. We aim to take the fan experience up a notch and bring it closer to International standards. With the introduction of nominal ticketing, we hope to provide a lot many more amenities to visitors and our participants.”