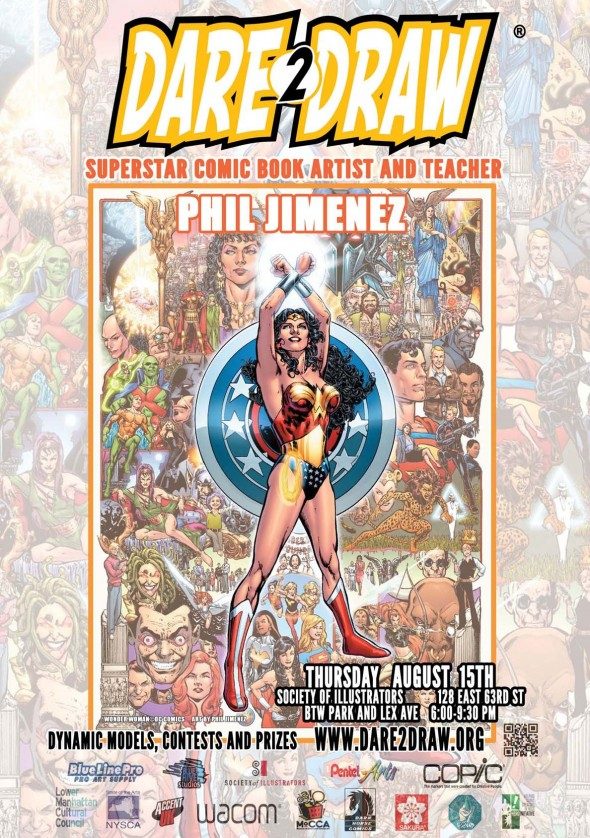 At an early age, Phil Jimenez learned of the world of comics through his love of Star Wars, leading him into Marvel Comics series based on the film. In addition, he was a big fan of the Super Friends and Wonder Woman TV show (soon to become a big fan of her comic version, thanks to George Perez’s post-crisis re-launch).

Attending Manhattan’s School of Visual Arts, Phil developed the skills he needed to become a comic book artist, being picked by Neal Pozner to draw a two-part Cyborg story in Showcase Œ93. A few of Phil’s more well known works are Fairest, Team Titans, Tempest, Guy Gardner: Warrior, Robin, Invisibles, New X-Men, and is very well known for his work on Wonder Woman, JLA/Titans: Technis Imperative, and his many pin-ups (notably: numerous Secret Files and Origins) and group splashes including the Justice League, Legion of Super-Heroes, and DC One-Million. Jimenez is currently at work on a creator-owned DC title for their Vertigo line called “Otherworld.”

Phil would also act as the stand-in for Tobey Maguire during the costume-designing scene in the 2002 Spider-Man feature film. But, in addition to his excellent talent for visual art, Phil is an accomplished writer as well thanks in large part to the man who not only hired him, but also taught him to write, draw, and love passionately, Neal Pozner. Unfortunately, Neal passed away in 1994 after contracting the HIV virus.