ARCHAIA EXHIBITING AT C2E2 THIS WEEKEND!

New Titles! A panel on 3D comics! And, contests to win great Archaia Books at our booth through Twitter, Instagram, FourSquare, and more! 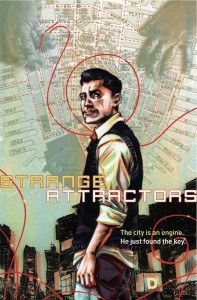 CHICAGO, IL (April 25, 2013) – Award-winning graphic novel publisher Archaia Entertainment is excited to announce it will exhibit at booth #1019 at the Chicago Comic and Entertainment Expo (C2E2) for a fourth straight year since the event’s inception! C2E2 is one of the Midwest’s biggest celebrations of comics and pop culture, taking place during the weekend of April 26-28, 2013 in the West Hall of McCormick Place in Chicago, Illinois. Archaia’s corporate headquarters is based in Chicago.

“We love making C2E2 one of our biggest events of the year. Nearly our entire management team is from Chicago, the Chicago fans are great, and our creators really make it a special show for us,” raved Chicago native, Jack Cummins, President & COO of Archaia. “We have great new titles like Strange Attractors, Mumbai Confidential, and HAWKEN: GENESIS, as well as Rust Vol. 2: Secrets of the Cell, Jim Henson’s The Dark Crystal: Creation Myths Vol. 2, and Pantalones, TX: Don’t Chicken Out. We are excited for our fans to see these new books and find out about the new upcoming Mouse Guard books directly from Eisner Award winner David Petersen.”

Creators and contributors scheduled to appear at the Archaia booth include:

Check the signing schedule at Archaia.com for your favorite creator’s availability. Here’s what else is going on at the Archaia booth during C2E2 weekend:

• We will present a panel on Sunday! Archaia Entertainment Presents: Comics Storytelling and the Lost Art of 3D, 1:30-2:30pm, Room W471. Join us for an uncensored discussion of the medium’s benefits and drawbacks, as well as a wide-ranging survey of the highs and lows of 60 years of 3D comics, only at C2E2 2013!   We will preview the 2013 release of the ambitious, all-3D graphic novel The Joyners in 3D from Archaia, writer R.J. Ryan (Syndrome), New York Times best-selling illustrator David Marquez (All-New X-Men, Ultimate Comics Spider-Man, Syndrome), and Archaia Editor-in-Chief Stephen Christy have invited a panel of creatives from across comics to dig deep into both the highs and lows of using 3D as a storytelling tool. The multimedia presentation will include big-screen glimpses of comics’ most famous—and most forgettable—3D projects, as well as a brief, exclusive sneak peek at Ryan & Marquez’s epic 3D melodrama, The Joyners in 3D. Moderated by Word Balloon podcast host John Siuntres, every panel attendee receives a free pair of 3D glasses and a coupon to receive a copy of the 2012 Free Comic Book Day hardcover at the Archaia booth (while supplies last)!

• Meteor Entertainment is bringing the experience of their smash hit, online, free-to-play, giant-mech video game HAWKEN to C2E2 with two play-test kiosks set up at the Archaia booth! Copies of the accompanying graphic novel, HAWKEN: GENESIS, will be on hand for purchase, and each copy comes with a scratch-off card with a code that can be redeemed for 10,000 HAWKEN Credits for use in the game!

• Charles Soule, the new writer of DC’s Swamp Thing, will be on hand to autograph advance copies of his new Archaia graphic novel, Strange Attractors, which is the fascinating sci-fi story of how a professor uses mathematics to help keep New York City from destroying itself! Check for his signing schedule at the booth (#1019) or on Archaia.com.

• Fans who purchase copies of Hopeless, Maine will receive a free, handmade postcard created by authors Tom and Nimue Brown. Quantities are limited!

• Using Foursquare, fans have a chance to win an all-ages prize pack containing copies of: Mouse Guard Vol. 1: Fall 1152; Rust Vol. 1; Pantalones, TX; and Cow Boy: A Boy and His Horse. To enter, simply check in to “Archaia Entertainment: Booth #1019” (http://4sq.com/12FDU7y) through the Foursquare app on your iOS or Android phone and tweet your check-in using #ArchaiaC2E2. Winners will be contacted to receive their prize. More info: http://on.fb.me/12G8IFk .

• Using Instagram, fans have a chance to win a Henson/Archaia graphic novel prize pack containing copies of: Fraggle Rock Vol. 1, Fraggle Rock Vol. 2: Tails and Tales, The Dark Crystal: Creation Myths Vol. 1, and The Dark Crystal: Creation Myths Vol. 2. To enter, take creative photos of the Archaia booth at C2E2 (#1019), upload it using the Instagram app on your iOS or Android phone, and use the hashtag #ArchaiaC2E2. Archaia will choose the best photo and contact the winner to receive their prize! Photos will be posted on the Archaia Facebook page! More info: http://on.fb.me/11idRR2.

• Archaia Entertainment will be hosting a Retweet to Win contest through Twitter for fans who can’t make it to C2E2! Retweeting starts Friday, April 26th at 10am CST! This contest will run thru Sunday, April 28th. To enter, you must follow Archaia on Twitter, look for the special “RT to Win” tweet from our account (@Archaia) which will be sent out several times each day throughout C2E2 weekend (April 26-28). Multiple winners will be selected each day. Prizes include copies of: Cow Boy: A Boy and His Horse; The Dark Crystal: Creation Myths Vol. 1; Fraggle Rock Vol. 1; Gunnerkrigg Court Vol. 1; HAWKEN: GENESIS; Mouse Guard Vol. 1: Fall 1152; Pantalones, TX; Return of the Dapper Men; andRust Vol. 1. More info: https://www.facebook.com/events/434507266642329/.

See you at C2E2! Visit c2e2.com for information on how to buy tickets!

Archaia is a multi-award-winning graphic novel publisher with more than 75 renowned publishing brands, including such domestic and international hits as Mouse Guard, Rust, Cow Boy, Cursed Pirate Girl, Gunnerkrigg Court, and Artesia. Archaia has also published an entire line of graphic novels in partnership with The Jim Henson Company, including the multiple award-winning Jim Henson’s Tale of Sand and such beloved tales as The Dark Crystal, The Storyteller, and Fraggle Rock. Alongside these celebrated titles, Archaia has released English translations of numerous renowned foreign titles to much fanfare, including The Killer, Sergio Toppi’s Sharaz-De, and The Secret History.

In addition to its partnership with The Jim Henson Company, Archaia has forged creative partnerships with storytellers in all facets of the entertainment industry, resulting in print and digital expansions of such noted properties as Bleedout and HAWKEN (video games), Immortalsand Planet of the Apes (film), and Space: 1999 (television).

Archaia has built an unparalleled reputation within the creator community for producing meaningful, transformative content, building one of the industry’s most visually stunning and eclectic slates of graphic novels.