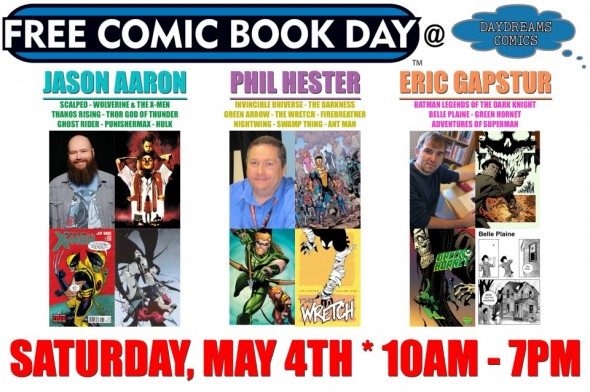 Free Comic Book Day 2013 is upon us! Come join us all day long for special sales, prizes, and of course, FREE COMICS!

After a successful 2012 event, we will once again be doing a fund raiser for the Iowa City Animal Center this year! Make a donation during FCBD and get free graphic novels – and the more you donate the more free stuff you get!

We will also be hosting the following comic book creators throughout the day. They will be available to sign autographs, do sketches and talk with fans!

Eric Gapstur: Finalist in Amazon’s Comic Strip Superstar contest! He currently working on his own strip comic Belle Plaine as well as honing his comic inking skills. He has a couple Green Hornet covers to his credit, and recently completed a Batman Legends of the Dark Knight story with Phil Hester. Be on the lookout for an upcoming Adventures of Superman story in the near future!

So come out to the shop, and bring your family and friends!