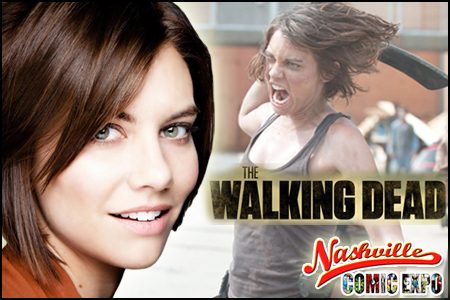 Lauren Cohan, who plays an integral character (“Maggie Greene”) in AMC’s hit TV series, The Walking Dead, as well as being featured in the TV shows Supernatural and Vampire Diaries, headlines the first Nashville Comic Expo.

Nashville—the Music City, will have its first true ongoing comic con with the Nashville Comic Expo on September 14-15, 2013. The convention will feature a large selection of vendors selling comic books, action figures, cards, games, manga and Star Wars items. There will be something for everyone at this comic con. A line-up of local writers and artists will be exhibiting their works, selling original artwork and accepting commissions.

The Nashville Comic Expo will feature the following industry professionals that attendees are invited to meet, greet, and commission artwork from at the convention (this list may alter as more creators are added or removed):

The Nashville Comic Expo will be on September 14-15, 2013 at the Gaylord Orpyland Resort and Convention Center. Admission is $20 for adults and admission is FREE for children (12 and under). Parking is $10.