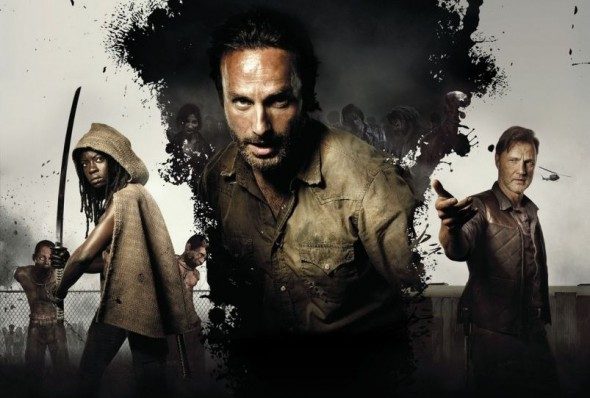 Norwalk, CT, September 14, 2012: New York Comic Con (NYCC) officials have confirmed that a high profile panel focusing on season three of AMC’s hit television series The Walking Dead will take place at this year’s pop culture extravaganza. Cast members including Andrew Lincoln will be joined by showrunner and executive producer Glenn Mazzara as well as executive producers Robert Kirkman and Gale Anne Hurd. Moderated by Talking Dead host Chris Hardwick, The Walking Dead panel, which will take place in the IGN Theater on Saturday, October 13, 5:00pm – 6:00pm, will include an exclusive clip from the premiere episode of season three.

In addition to Andrew Lincoln, additional cast members participating in the panel include Norman Reedus,Chandler Riggs, Danai Gurira, David Morrissey and  Michael Rooker. There will also be a limited signing for 50 fans and tickets for the signing will be given away on a first served basis on Saturday morning (10/13). Further details about the signing will be announced soon. The Walking Dead, which returns to AMC on October 14 at 9:00pm (EST)/8:00pm (CST), was originally a comic book series created by writer Robert Kirkman in 2003. It won the 2010 Eisner Award for Best Continuing Series and the television series premiered to enormous attention and acclaim on October 31, 2010.

“The Walking Dead is a huge attraction for our fans and I am enormously grateful to AMC for making this possible,” notes Lance Fensterman Show Manager for NYCC and Group Vice President for ReedPOP. “This is a star-studded line up of panelists and I know that we will have thousands of fans who will want to be on hand to hear these creators, producers and stars talk about their contribution to this incredible show. I can’t thank these guests enough for giving their time and talent to New York Comic Con.”

Tickets for New York Comic Con in 2012 are currently available for purchase at www.NewYorkComicCon.com. Anyone interested in exhibiting at New York Comic Con should contact Larry Settembrini, Larry@ReedPOP.com. Other information about the show, as well as news about ReedPOP, which organizes a range of pop culture events, is available at facebook.com/NewYorkComicCon and twitter.com/NY_Comic_Con . Organizers note that many more guests will be announced over the next few weeks and fans should keep their eyes on NYCC’s website and blog for additional comics, entertainment and anime announcements.

ABOUT REEDPOP: ReedPOP is a boutique group within Reed Exhibitions which is exclusively devoted to organizing events, launching and acquiring new shows and partnering with premium brands in the pop culture arena. ReedPOP is dedicated to producing celebrations of popular culture throughout the world that transcend ordinary events by providing unique access and dynamic personal experiences for consumers and fans. The ReedPOP portfolio includes: New York Comic Con (NYCC), Chicago Comic & Entertainment Expo (C2E2), Penny Arcade Expo (PAX) Prime & East, Star Wars Celebration, Fantasy Football Fest and the UFC Fan Expo. The staff at ReedPOP is a fan based group of professionals producing shows for other fans, thus making them uniquely qualified to service those with whom they share a common passion. ReedPOP is focused on bringing its expertise and knowledge to world communities in North America, South America, Asia and Europe.