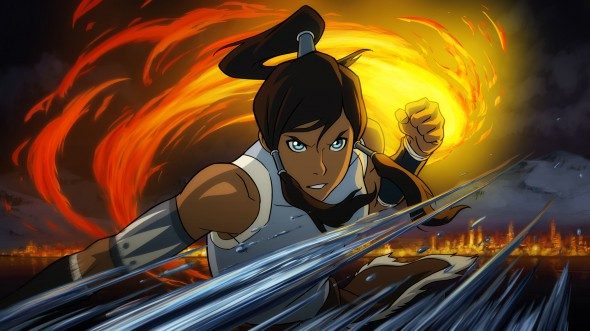 The mythology of the beloved animated franchise from Avatar: The Last Airbender creators, Michael Dante DiMartino and Bryan Konietzko, continues with the Nickelodeon premiere of The Legend of Korra on Saturday, April 14, at 11:00 AM (ET/PT), with a one-hour television event featuring back-to-back episodes.  The all-new series centers around a new Avatar named Korra, a 17-year-old headstrong and rebellious girl who continually challenges and bucks tradition on her quest to become a fully realized Avatar in a world where benders are under attack.  The Legend of Korra will air regularly on Saturdays at 11:00 a.m. (ET/PT) on Nickelodeon.

“Mike and Bryan created an incredibly layered world with the animated Avatar franchise — rich with mythology and artistry,” said Brown Johnson, President, Animation, Nickelodeon and MTVN Kids and Family Group.  “The Legend of Korra takes their vision even further, into a more modern world led by a new Avatar who is a fearless and spirited teenage girl.”

The Legend of Korra takes place 70 years after the events of Avatar: The Last Airbender and follows the next Avatar after Aang – a girl named Korra (Janet Varney) who is from the Southern Water Tribe.  With three of the four elements under her belt (Earth, Water and Fire), Korra seeks to master Air.  Her quest leads her to Republic City, the modern “Avatar” world that is a virtual melting pot where benders and non-benders from all nations live and thrive.  Korra quickly discovers that the metropolis is plagued by crime as well as a growing anti-bending revolution that threatens to rip the city apart.  Under the tutelage of Aang’s son, Tenzin (J.K. Simmons), Korra begins her airbending training while dealing with the dangers at large.

In the premiere episode, “Welcome to Republic City,” Korra leaves the safety of her home and travels to bustling Republic City to begin her airbending training.   Once there, she is shocked to find a big city full of dangers, including criminal bending gangs and a vocal anti-bending revolution.  In episode two, “A Leaf in the Wind,” Korra is living with her airbending teacher Tenzin on Air Temple Island.  Frustrated with her inability to master airbending, she turns her attentions to Republic City’s famous Pro-bending Arena.  There she befriends two brothers, Mako (David Faustino) and Bolin (P.J. Byrne), who compete in professional bending matches.  Korra is immediately drawn to Pro-bending’s dynamic fighting style.

Starting today, fans can work to unlock an exclusive sneak peek of The Legend of Korra premiere at korranation.com.  Beginning April 1, fans may log on to nick.com for an interactive experience and introduction to Republic City.  Show information, fun facts, micro games and additional new content make up this “Welcome to Republic City” online experience.  Also leading up to the television series premiere, Xbox users will have the opportunity to download the first episode and trailer for free and purchase episodes from Avatar: The Last Airbender.  The first The Legend of Korra episode will be available on VOD.  In conjunction with the series premiere, Nick’s mobile channel NIMO, will have a live simulcast of the first two episodes.

An award-winning filmmaker, DiMartino was a director at Film Roman for six years, working on the prime-time animated series King of the Hill, Family Guy and Mission Hill.  During his tenure there, DiMartino animated and directed the short animated film Atomic Love, which has gone on to screen at festivals across the country including Sundance and the Los Angeles Film Festival.  It also aired as part of the Nicktoons Animation Festival.

Konietzko began his career in animation as a character designer at Film Roman for Fox’s prime-time series, Family Guy.  He soon moved to the post of assistant director for two more Film Roman shows, Mission Hill and King of the Hill, working beside animation director DiMartino.  Konietzko then became a storyboard artist and later an art director for the Nickelodeon animated series Invader Zim.

The Legend of Korra is being produced at the Nickelodeon Animation Studios in Burbank, Calif.

Nickelodeon, now in its 32nd year, is the number-one entertainment brand for kids. It has built a diverse, global business by putting kids first in everything it does. The company includes television programming and production in the United States and around the world, plus consumer products, online, recreation, books and feature films. Nickelodeon’s U.S. television network is seen in 100 million households and has been the number-one-rated basic cable network for 17 consecutive years. For more information or artwork, visit http://www.nickpress.com. Nickelodeon and all related titles, characters and logos are trademarks of Viacom Inc. (NASDAQ: VIA, VIAB).