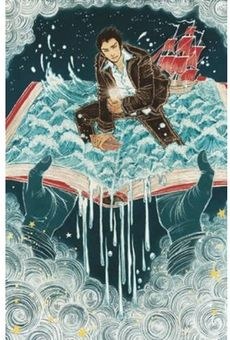 Tom Taylor’s father created the Tommy Taylor fantasy series, boy-wizard novels with popularity on par with Harry Potter. The problem: Dad modeled the fictional epic so closely to Tom’s real life that fans are constantly comparing him to his counterpart. In Volume 4, after the shocking return of Tommy’s father, the mysterious Cabal audition a new assassin and Tom seeks out the source. The source of what? He’s not really sure, but it looks like a whale, and apparently it can be found in the Nantucket farmhouse where Moby Dick was written. What he finds is a path into a whole different ocean, with more trouble (and more whales) than he could possibly imagine.

Forbidden Planet is the largest store of its kind in the world. Some of the biggest names in Sci-Fi, Fantasy, Comics and Cult Entertainment have come to our London Megastore for signing events, including: Gaiman, Terry Pratchett, Terry Gilliam, Simon Pegg, William Gibson, Mark Millar, Guillermo Del Toro, Brian Froud and Stephen King.