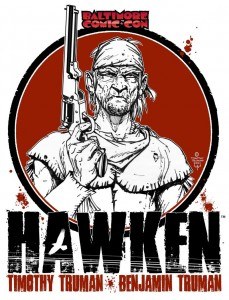 Co-created with his 28-year-old son, writer Benjamin Truman, the new project tells the tale of ghost-haunted pistolero Kitchell Hawken and his blood-drenched vendetta against the men who scalped and tortured him then left him for dead. The first issue ships in November from IDW Publishing.

Renowned for his work on such titles as hard-hitting action titles as Grimjack, Scout, Wilderness, Hawkworld, Turok, Jonah Hex, and Dark Horse Comics’ Conan, Timothy is hardly a stranger to the BCC. “Baltimore is by far my favorite convention every year,” Truman says. “I attended my first show several years ago, after I decided to take the day off and check it out as a ‘civilian.’ I was immediately impressed. Baltimore Comic-Con made me feel like a ‘fan’ again. I haven’t missed a show since.” To mark the Baltimore preview, Tim and Ben are preparing limited edition Hawken BCC t-shirts and prints especially for the appearance.

In his featured blog for the pop-culture site The Morton Report, journalist Bill Baker  gave readers a taste of what to expect from the new tale:

“Over the course of his long and storied career, writer-artist Timothy Truman has had brushes with all manner of killers and antiheroes. But his latest encounter with the darker side of humanity, in the supernaturally-charged Western miniseries features Hawken, a character that he freely admits is perhaps the worst of the lot.

“According to Truman, the titular character, Kitchell Hawken ‘has been many things in his day: Scout, tracker, trader, scalp-hunter, raider, hired gun…. But mostly, he’s been a nasty son-of-a-bitch.’

“Each issue of the six-part tale follows the aged Hawken as he wreaks bloody vengeance upon the very men he used to work for, a cartel of corrupt politicians and arms merchants called the Tucson Ring. Along the way readers learn more about Hawken’s reason for turning on his former employers and the many horrors that the haunted gunman has committed over the course of a blood-soaked life.

“And just to be clear, ‘haunted’ literally describes Hawken’s situation, as the remorseless killer’s accompanied throughout his vendetta by the ghost of every person he’s killed, all unwilling companions forced by a curse to assist the gunslinger with his vengeance.

“Truman, who’s become known for his ability to portray unlikable loners in convincing manner, freely admits, ‘Folks would be hard-pressed to find a character as ruthless as Kit Hawken. He has good reasons for his rampage, and believe me, a rampage it is. For once, the bad guys have truly messed with the wrong man.’

“And while anyone might be hard-pressed to describe the proceedings as family fare, it is, in fact, a family affair. That’s because Tim Truman’s creative partner on this project is none other than Ben Truman, his son.

“Ben, who’s scripting the series, works as a teacher in Tucson, AZ. As he describes it, the character and his sordid tale arose almost by chance during one of his parents’ visits to the area last year. The younger Truman recalled that ‘while driving through Crater Park I asked Dad if he’s ever seen any accounts where a man had survived a scalping. Somehow, that kicked it off.

“‘Hawken grew out of the landscapes of each new place we visited: His name in Flagstaff, his past in Bisbee, the curse in Tempe, his vendetta in Tombstone. By the time we left San Xavier Mission, the first issue was plotted.’

“The elder Truman gained widespread notoriety with his first two major efforts, Scout and Grimjack. These comics were some of the most critically lauded independent comics of the ’80s, fan-favorites that catapulted Truman and his various creative partners into the upper echelons of the mainstream comics industry.”

Each of the six issues of Hawken will cost $3.99 and contain 32 pages printed in antiqued duo-tone. The book joins such popular IDW titles as 30 Days of Night, Hasbro’s Transformers and G.I. JOE, Paramount’s Star Trek, Toho’s Godzilla, HBO’s True Blood, and the BBC’s Dr. Who.