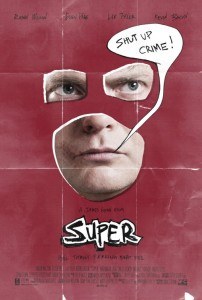 SUPER Screening with James Gunn Intro and Q & A at 7:30 pm

Open to the Public: First-come-first-served (get there early!)

Open to IFC Film Center members and friends and family (sold out).

UCLA On-Campus Screening of SUPER with a Q & A by James Gunn at 8:00 pm

Open to UCLA Students Only

Q & A after 7:40pm screening of SUPER with James Gunn and Doug Benson

Introduction of the 10:15pm show with James Gunn

You must have a ticket stub from a specific TBD Sunday SUPER screening to gain entry – more information will be released soon on this grand event.

James Gunn in attendance for the opening night of SUPER followed by a Q & A.