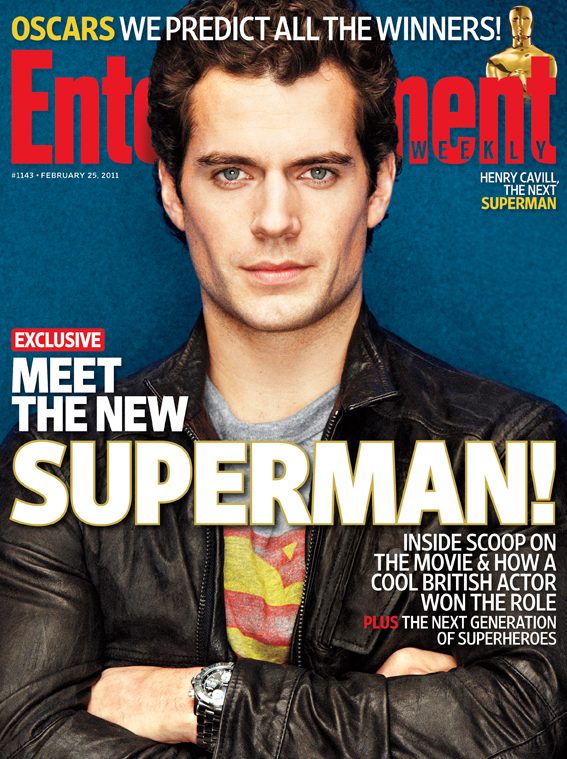 THIS WEEK’S ISSUE HAS THE EXCLUSIVE FIRST LOOK AT HENRY CAVILL AS THE NEW MAN OF STEEL, PLUS THE NEXT GENERATION OF SUPERHEROES

NEW YORK – Henry Cavill is Hollywood’s newest superhero thanks in part to an all-star team of filmmakers (including Christopher Nolan and Zack Synder) that are set to relaunch the truest and bluest of all superheroes: Superman. This week’s issue of Entertainment Weekly brings an exclusive look at the British man in tights, whose career may break the speed of sound.

To become Hollywood’s new Man of Steel, Henry Cavill had to pass the Laugh Test. To wit: Could he wear the Superman suit without anyone giggling? And not just any Superman suit. To shoot his screen test last month, the 27-year-old British actor donned a replica of the costume Christopher Reeve wore in director Richard Donner’s classic 1978 film. By today’s standards, those sky blue spandex threads with the iconic S shield on the chest look dated—and hence an effective yardstick for the team now charged with making Superman fly for 21st-century moviegoers. “If you can put on that suit and pull it off,” says director Zack Snyder, “that’s an awesome achievement.”

As an assistant helped him into the suit, Cavill was feeling less than super. He certainly has the face for Superman—solid chin, defined cheekbones, piercing eyes, dark hair. He’s also 6′ 1″ and radiates intelligence, maturity, and all around good-guyness, though he’s too humble to say so himself. But Cavill worried that the rest of him wasn’t up to snuff. He had recently lost the muscle tone he gained to play a loincloth warrior in the mythic fantasy Immortals, due this November. “All I could think was, Oh, God, they’re going to look at me and go, ‘He’s not Superman. Not a chance,’ ” recalls Cavill, best known for playing Henry VIII’s buddy Charles Brandon on Showtime’s The Tudors. “The actor inside me was going, ‘You’re not ready! You’re not ready!’ ” Snyder saw something different. “He walked out and no one laughed,” says the director, a geek pop idol for his work on Dawn of the Dead, 300, and Watchmen. “Other actors put that suit on and it’s a joke, even if they’re great actors. Henry put it on, and he exuded this kind of crazy-calm confidence that just made me go, ‘Wow. Okay, this is Superman.’ ”

And with that, Superman’s Hollywood relaunch is up, up, and almost away; shooting on the as-yet-untitled Warner Bros. film begins this summer under Snyder, producer Christopher Nolan (whose two Batman flicks have grossed nearly $1.4 billion at the box office worldwide), and screenwriter David S. Goyer, who also wrote Batman Begins, three Blade films, and Dark City. The result of their collaboration, due late next year, will be a must-see event, one the studio hopes will leave audiences in a must-see-more mood.

A NEW GENERATION SUITS UP!

The next two years will see a crush of movie superheroes, both familiar characters and newcomers to the multiplex. Here’s a look at the coming wave of hero mania.

Ryan Reynolds stars as jet test-pilot Hal Jordan, who’s recruited into an intergalactic police force with Earth as his beat. The draw for the audience may be that, like filmgoers, Jordan doesn’t entirely comprehend his mission. The 34-year-old star says it helps that DC’s Green Lantern isn’t as widely known outside Comic-Con circles. “I liked that it wasn’t in my vocabulary. It meant there was a process of discovery,” says Reynolds. “He’s not in the mainstream the way Superman or Spider-Man is.” The movie also tackles its otherworldly extravagance with a sense of humor. Reynolds, a veteran of comedies like Van Wilder and The Proposal, says he used to think of himself as a strictly comic actor, not a hero: “I looked like Dick Van Dyke, so I thought I was going that route”

The new Spider-Man will test the limits of comic-book do-overs. (500) Days of Summer director Marc Webb and a new actor to wear the red-and-blue Spidey suit: The Social Network’s Andrew Garfield, 27. Exec producer Avi Arad says the film won’t erase what came before but will try to weave a narrative that could take place within the framework of the earlier films. “It’s not a comeback,” he says. “You have to look at it this way: Do you want to know more about Spider-Man? This movie is going to tell stories that you didn’t see in movies 1, 2, and 3.”

Fans have relentlessly tried to guess which direction Christopher Nolan intends to take Christian Bale’s Dark Knight in the director’s final Batman film, but the filmmaker has offered scant hints. Nolan has confirmed he won’t add the Riddler or bring back the Joker, out of respect for the late Heath Ledger’s Oscar-winning work in The Dark Knight. But in recent weeks, he has cast Inception costar Tom Hardy as Bane, a chemically enhanced strongman who broke Batman’s back in the 1993 comics, and Inception alumni Marion Cotillard and Joseph Gordon- Levitt are in talks for unspecified roles. Anne Hathaway is also on board as Selina Kyle, though Nolan’s casting announcement made no mention of Kyle’s alter ego, Catwoman. With all the cryptic clues, Nolan has already achieved the goal of every superhero film: keeping an audience in a state of perpetual suspense. And he hasn’t shot a single frame of film.

Other exclusive sneak peeks include Thor, X-Men First Class, Captain America: The First Avenger, The Avengers, and The Wolverwine.