This is kind of old news now, but in case you missed it…

NEW YORK and COLUMBUS, Ohio – Gareb Shamus, CEO of Wizard Entertainment, today announced the acquisition of Mid-Ohio-Con. The show will make its inaugural appearance on the Wizard World Tour circuit on the weekend of October 22-23, 2011 at the Greater Columbus Convention Center in Columbus, OH. 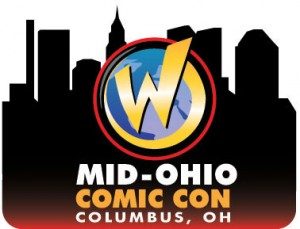 “The acquisition of Mid-Ohio-Con gives us an even stronger presence in the key Midwest market,” said Shamus. “We are excited to have the opportunity to build from the great foundation of Mid-Ohio-Con, which has consistently delivered the best in comics, celebrity and pop culture entertainment for 30 years running.”

“We are thrilled to join the Wizard World Tour,” said James Henry, Managing Director of Mid-Ohio-Con. “We are excited to work with Gareb and the Wizard World team to produce Mid-Ohio Comic Con and we are confident that this partnership will result in a show that will delight fans, creators and exhibitors alike in 2011 and beyond.”

Mid-Ohio-Con is one of America’s longest-running and most successful comic book and pop-culture conventions, carrying on a fun and family-oriented tradition of bringing fans of all ages together with leading comic book writers and artists, film and television stars and creators, and publishers and retailers from across the nation.

2010 marked Mid-Ohio-Con’s 30th anniversary show which included guests of honor David Finch and Adam Hughes along with featured media guests Michael Berryman and Lou Ferrigno and more than 100 creators from the worlds of comics, film, gaming and television. The show had record attendance and has received acclaim from exhibitors, fans and guests as the best in its long history.

For the most recent event information please visit www.wizardworld.com and become a Wizard World Comic Con Fan on Facebook.