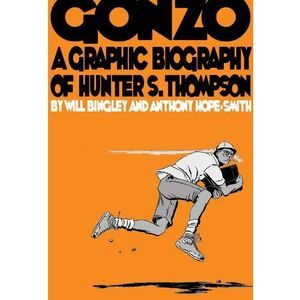 Will Bingley and Anthony Hope-Smith will be signing this title at the Forbidden Planet Megastore, 179 Shaftesbury Avenue, London, WC2H 8JR, on Saturday 27th November from 1 – 2pm.

Over the course of Hunter S. Thompson’s extraordinary life, he was publicly branded a bum, a vandal, a thief, a liar, an addict, a freak and a psychopath. Some of these were true. Yet, even when compared to the most significant figures of the 20th century, his legacy remains a brilliantly vital force.

This is his story – the story of a troubled kid who went on to become an international icon, a story that plumbs the darkest depths of American society and charts the now-legendary adventures that birthed Gonzo journalism and a lifestyle beyond imagination.