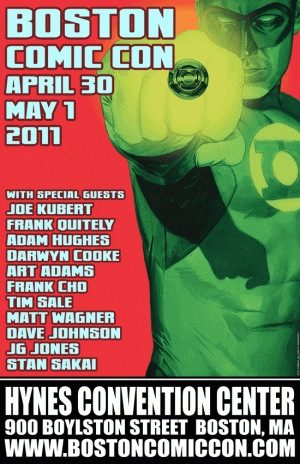 This spring the Boston Comic Con doubles in size and moves to a much larger venue, the Hynes Convention Center! In light of the massive crowds at the previous convention, the move was essential to accommodate the growing popularity of the show. And with this line up of comic creators, every extra foot of space is absolutely needed.

Joe Kubert is indisputably one of the most impressive craftsmen in the field’s history. During his time in the business, Kubert has drawn everything from horror to Westerns to superheroes: DC Comics’ Hawkman, Tarzan, Sgt. Rock, Batman, and The Flash. Kubert is also the creator and artist of characters The Heroic Caveman, Tor, and Abraham Stone. Kubert will be appearing Sunday only at the 2011 Boston Comic Con.

Scottish artist Frank Quitely most frequently collaborates with writer Grant Morrison on series including Batman & Robin, All-Star Superman, New X-Men, We3, and many more. This is a rare US appearance of one of the most influential and innovative artists in comics.

Adam Hughes is one of the most in-demand artists in the industry. A fan favorite for his covers on Catwoman, Wonder Woman, Star Wars, and more, Adam’s convention sketches are highly coveted by discerning collectors.

Darwyn Cooke is the creator of New Frontier from DC Comics. He formerly worked in animation where he created the title sequence of Batman Beyond. He is currently adapting Richard Stark’s Parker novels for IDW Publishing.

Frank Cho made a big splash with his comic strip Liberty Meadows while still in college. Entirely self-taught, he is regarded as one of the best Good Girl artists in the business; his sexy ladies have grace the pages of Mighty Avengers, The Ultimates, and Shanna the She-Devil.

Arthur Adams is one of the most influential comic book artists of his generation. Adams has a very detailed and realistic style that is a fan favorite. He has drawn everything from X-Men and The Fantastic Four to Batman and Superman Adams is also creator of Monkeyman and O’Brien.

Tim Sale is best known for working on iconic characters such as Batman, Superman, Daredevil, Hulk, and Spider-Man. He is currently drawing the highly anticipated continuation of his Spectrum series, Captain America: White.  Tim’s art is also known worldwide to fans of the NBC hit drama Heroes, as he created the television show’s prophetic visions of the future.

“Reverend” Dave Johnson’s highly design-based covers have been featured on The Punisher and most famously on 100 Bullets. Dave is also the founder of The Drink & Draw Social Club.

J.G. Jones is the co-creator of Wanted. He also created every cover for DC’s year-long weekly series 52 and drew the Final Crisis series. Most recently, he is working on the covers for First Wave.

Matt Wagner is well-known for his character-driven, creator-owned series Grendel and Mage. He has also worked on comics featuring The Demon and Batman. Wagner’s recent projects include Madame Xanadu for Vertigo and a Green Hornet spin-off for Dynamite Entertainment.

Ryan Ottley came to fame when he took over the penciling duties for Invincible from original artist Cory Walker. Since then, he has co-created the series Haunt and Sea Bear & Land Shark.

Tony Harris is most famous for co-creating the Eisner-winning series Starman and Ex Machina. An artist of wide acclaim, he is the founder of Jolly Roger Studios.

Stan Sakai began his career by lettering comic books, notably Groo the Wanderer by Sergio Aragones and Mark Evanier and Stan Lee’s Spider-Man daily comic strip. He became famous with the creation of the epic saga Usagi Yojimbo, first published in 1984, which he still continues as the sole creator, doing almost all the artwork himself.

Terry Moore created the long running indie hit Strangers in Paradise. SIP is published under Moore’s own imprint, Abstract Studio, and is one of the most successful independently published books in the comics industry.

Sean “Cheeks” Galloway is a cartoonist whose fun, lively style was directly adapted to the Spectacular Spider-Man cartoon series. He drew the Teen Titans feature for DC’s Wednesday Comics.

Stephane Roux is a French comic book artist who is known mostly for his cover work for Marvel, DC, and Semic Comics. He has worked on such titles as Witchblade and Birds of Prey. Roux is currently working on the ongoing DC Comics series Zatanna.

Khoi Pham is a graduate of Northeastern who went to become a trial attorney till he decided to live his dream of becoming a comic artist. One of the Young Guns of Marvel Comics with art on titles such as Mighty Avengers and The Incredible Hercules, he is currently drawing the series Chaos War.

David Mack is the creator of the independent comic book sensation Kabuki. A talented artist who often experiments with media, his works has been seen in many comic series including Daredevil, White Tiger, and Avengers.

Finally, Mark Chiarello is the Art Director of DC Comics, he edited the high profile and critically acclaimed series Batman: Black & White, Solo, and this past summer’s Wednesday Comics. A graduate of Pratt Institute, he worked on Batman/Houdini, countless covers for both Marvel and DC as a painter, and published a book of portraits of baseball players from the Negro Leagues.

Boston Comic Con is happy to announce that Chiarello will once again conduct a limited number of portfolio reviews. This is a rare opportunity for artists to show their work to the man in charge of the look of the DC Universe.  Last year he met with dozens of local artists and found at least one to bring into the DC fold.

Tickets are now available online through the convention website. Prices are $20 for a single day pass and $35 for a weekend pass.

The Boston Comic Con is a 100% independently-run comic book show committed to bringing the biggest and best comic creators to New England. Run by fans for fans, Boston Comic Con is not affiliated with any other convention tour or corporate interests. Hosting over 40,000 square feet of vendors selling comic books, toys, posters, trading cards, and other pop culture memorabilia, this is a destination event for geeks of any stripe. The convention will be held Saturday April 30th and Sunday May 1st at the Hynes Convention Center, 900 Boylston Street, Boston, MA from 10am to 5pm each day. For more information please go to our website at www.bostoncomiccon.com and follow us on Twitter (@BostonComicCon) and Facebook!