Columbus, OH – October 15, 2010 – Mid-Ohio-Con announced that acclaimed artist Arthur Suydam has joined the guest roster for Mid-Ohio-Con 2010. “We are very pleased to add Arthur to the Mid-Ohio-Con 2010 guest list. We’ve really dialed things up for our 30th anniversary and we’re looking forward to an amazing turnout on the weekend of November 6-7, 2010 in Columbus, OH.” said James Henry, Managing Director of Mid-Ohio-Con. 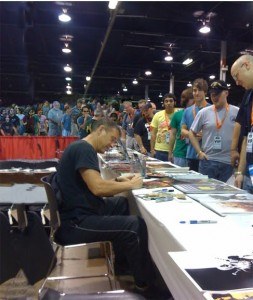 Suydam has been lauded for his work with awards that include the Spike TV Scream Award (Best Writer, Best Artist, Best Comic of the Year) and the inclusion of his short story Christmas Carol in The Mammoth Book of Horror and Legends for Best Comic Horror Stories of All Time. Recently honored with inclusion in Spectrum 14: The Best in Contemporary Fantastic Art, Suydam was also honored with the prestigious Gold Award in Spectrum 12, in 2006, the San Sebastian Film Festival Lifetime Achievement Award, a Lifetime Achievement Award from the University of Maryland Eastern Shore, and numerous awards across the globe.