Bendis, Fraction, Larroca, Loeb and Quesada to Appear on Panels

Norwalk, CT, September 17, 2010: Marvel Comics will once again have a strong presence at New York Comic Con (NYCC). Organizers of the annual East Coast pop culture extravaganza have announced that five notable personalities from the renowned comic books and media entertainment company will be Guests of Honor at NYCC and will be participating in several panel discussions at the show. The Guests of Honor who will be taking the NYCC stage on behalf of Marvel include Brian Michael Bendis, Matt Fraction, Salvador Larroca, Jeph Loeb, and Joe Quesada.

“Marvel is a close partner and friend of our show and it is always a pleasure to announce their participation at New York Comic Con,” notes Lance Fensterman, Vice President for ReedPOP and Show Manager for both NYCC and NYAF. “The guests who will be appearing at NYCC on Marvel’s behalf are some of the most celebrated artists and creators working in the pop culture arena. We’re proud to be an industry leading event where premiere exhibitors may bring their talent, as well as launch and display their new content. We are seeing significant growth at NYCC this year and we are preparing for a show that promises to be huge!”

BRIAN MICHAEL BENDIS is an award-winning comics creator and one of the most successful writers working in mainstream comics. For the last nine years, Brian’s books have consistently sat on the top of the nationwide comic and graphic novel sales charts. Brian is currently helming a renaissance for Marvel’s Avengers franchise by writing both Avengers and New Avengers along with the wildly successful event projects House of M, Secret Invasion and Siege. Brian is one of the premiere architects of Marvel’s Ultimate line of comics, a line of comics specifically created for the new generation of comics reader, and he has written every issue of Ultimate Spider-Man since its best-selling launch in 1999. Brian’s other projects include Scarlet and the Eisner-Award-winning Powers, both from Marvel’s creator-owned imprint Icon. He lives in Portland, Oregon with his wife, Alisa, his gorgeous daughters, Olivia and Sabrina, and his dogs, Shroeder, Lucky, and Buster. 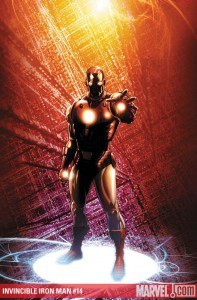 MATT FRACTION is the Eisner Award-winning writer of Invincible Iron Man, Thor and Uncanny X-Men, along with his creator-owned series Casanova. He’s written the graphic novels The Five Fists of Science and Last of The Independents. His other comics work includes a Sensational Spider-Man annual and The Immortal Iron Fist with Ed Brubaker, Punisher: War Journal with Rick Remender, Thor: Ages Of Thunder and Thor: Secret Invasion, and the Harvey-nominated The Order. He lives in Kansas City with his wife, the writer Kelly Sue DeConnick, his son Henry, two jerky dogs, and two jerky cats. And some fish. But that’s it.

SALVADOR LARROCA was born and raised in Valencia, Spain. After first working as a cartographer, Larroca began working as a comic artist at Marvel UK on titles including Dark Angel and Death’s Head II. Eventually taking his pencil to US books, Larroca spent three years on Marvel’s Ghost Rider before turning to Captain America, Iron Man, and Fantastic Four in Heroes Return. He then went onto titles including Uncanny X-Men, X-Treme X-Men, Spider-Man: House of M, and Ultimate Daredevil and Elektra. He is currently working on the Eisner-Award-winning Invincible Iron Man with Matt Fraction.

JEPH LOEB is the newly appointed EVP, Head of Marvel Television. He is an Emmy and WGA nominated American film and television writer/producer as well as an award winning comic book writer. He was a producer/writer on the TV series Smallville and Lost, writer of the films Commando and Teen Wolf and Co-Executive Producer/writer on Heroes. A four-time Eisner Award winner and five-time Wizard Fan Awards winner, Jeph’s writing, which has appeared on the New York Times Bestseller List, includes Spider-Man, Batman, Superman, The Hulk, Iron Man and Buffy the Vampire Slayer. His is currently writing HULK with Ed McGuinness, ULTIMATE X with Arthur Adams, NEW ULTIMATES with Frank Cho and CAPTAIN AMERICA: WHITE with his longtime collaborator Tim Sale.

JOE QUESADA wears many creative hats, as both an acclaimed writer-artist and the current editor-in-chief of Marvel Comics, the world’s largest and most dynamic comic book publisher. Joe also serves as Chief Creative Officer for Marvel Entertainment. In this role, Joe is steward of such legendary characters as Spider-Man, the X-Men, the Incredible Hulk, and the Fantastic Four. Even with an entire publishing company to run, Quesada keeps his creative hand moving as well. During his tenure as Editor-in-Chief, he’s completed Daredevil: Father, a story lovingly dedicated to his own father and illustrated Spider-Man: One More Day, which changed the popular web-slinging hero forever. He’s recently completed the bookend to One More Day, Spider-Man: One Moment in Time.

Exhibit space for this year’s NYCC is nearly sold out. Customers interested in signing up for New York Comic Con should contact Larry Settembrini at lsettembrini@reedexpo.com. Tickets for NYCC and NYAF may be purchased at www.nycomiccon.com. Other information about the shows, as well as news about ReedPOP, which also organizes Chicago Comic and Entertainment Expo (C2E2), is available at Lance Fensterman’s blog, www.mediumatlarge.net.

ABOUT REEDPOP: ReedPOP is a boutique group within Reed Exhibitions which is exclusively devoted to organizing events, launching and acquiring new shows, and partnering with premium brands in the pop culture arena. ReedPOP is dedicated to producing celebrations of popular culture throughout the world that transcend ordinary events by providing unique access and dynamic personal experiences for consumers and fans. The ReedPOP portfolio includes: New York Comic Con (NYCC), Chicago Comic and Entertainment Expo (C2E2), Penny Arcade Expo (PAX) East & West, Star Wars Celebration V, New York Anime Festival (NYAF), and UFC Fan Expo. The staff at ReedPOP is a fan based group of professionals producing shows for other fans, thus making them uniquely qualified to service those with whom they share a common passion. ReedPOP is focused on bringing its expertise and knowledge to world communities in North America, South America, Asia and Europe.