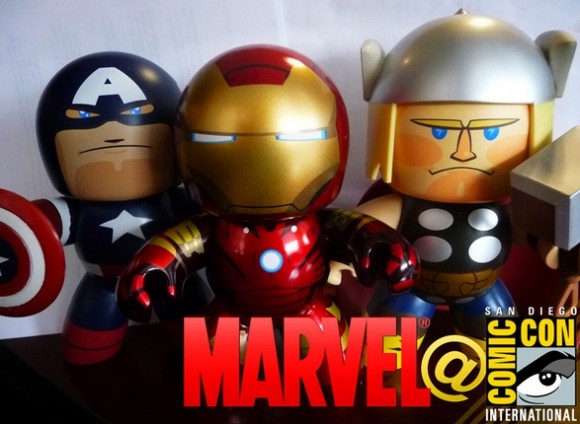 Marvel has released their panel schedule for Comic-Con International: San Diego. They will be live blogging all their panels for everyone following along at home. For the full details, go here.

12:45 p.m. – 1:45 p.m. Pacific, Breaking into Comics the Marvel Way
Welcome to the House of Ideas, where the doors have never been more open to new talent than today! Talent Liaison C.B. Cebulski is joined by special guests Brian Michael Bendis, Matt Fraction, Skottie Young, Humberto Ramos & more to talk about what it takes to make yours Marvel as a profession, from writer to artist to editor and more! Do you have what it takes? Come find out!! Room 6DE

3:15 p.m. – 4:15 p.m. Pacific, Mondo Marvel
It’s the panel about all things Marvel! We’ve got the top talent on hand to talk about all of your favorite heroes and villains as well as make a few surprise announcements! Panelists include everyone from Jeph Loeb (HULK), Brian Michael Bendis (AVENGERS), Marvel’s Talent Liaison C.B. Cebulski, Dan Abnett & Andy Lanning (THE THANOS IMPERATIVE), Jim McCann (HAWKEYE & MOCKINGBIRD) Senior Editor Mark Paniccia and more as they take on all questions! Room 6DE

5:45 p.m. – 6:45 p.m. Pacific, What’s Next – Welcome to the Digital House of Ideas
Get the inside scoop on the all-new, all-improved, all-awesome Marvel.com, Marvel Digital Comics, Marvel Motion Comics and so much more! With the launch of the groundbreaking Marvel Comics app in the iTunes App Store, this has been a historic year for the Digital House of Ideas. Now, find out what’s next! Meet fellow fans of Marvel Digital Comics Unlimited and find out which of the hundreds of completed series in the service everyone’s talking about. Plus, get caught up on Marvel.com’s free streaming animated shows, how to “Create Your Own Comic” and “Super Hero,” original video productions, the Marvel Audience Network including our very own social network and so much more. Join members of the Marvel Digital Media Group for all the digital dynamite! Room 6DC

10:00 a.m. – 11:00 a.m. Pacific, X-Men
Following SECOND COMING, Marvel’s merry mutants are unable to catch a quick breather. As CURSE OF THE MUTANTS begins, there’s no telling what the vampires have in store for the X-Men…or is there? You’ve got questions & these people have answers! Vice President, Executive Editor Axel Alonso is joined by a host of creators to lay out what’s going on with the X-Men. Panelists include Matt Fraction (UNCANNY X-MEN), Victor Gischler (X-MEN), Marjorie Liu (DARK WOLVERINE), Daniel Way (DEADPOOL), Editor Nick Lowe and more for this all-new, all-DEADLY panel! Room 6DE

11:15 a.m. – 12:15 p.m. Pacific, Marvel Video Games
“Spider-Man: Shattered Dimensions,” “Super Hero Squad Online,” “Marvel vs. Capcom 3,” “Thor” and more. Join us for exclusive trailers, surprise reveals, and Q & A with the game creators as well as the Marvel writers working on the next wave of Marvel Games from some of the industries top publishers. Room 6DE

12:45 p.m. – 1:45 p.m. Pacific, Marvel Animation
Hosted by an all-star cast of Marvel Animation talent, and featuring a special guest of legendary proportions, this interactive game-show panel will get you more than excited about Marvel’s new and continuing animated series. Here’s your chance to snag some sweet Marvel merchandise! Come be a part of the action, with all new seasons of “The Super Hero Squad Show” and “Iron Man Armored Adventures” as well as Marvel Knights, Marvel Anime, and other upcoming Marvel Animation properties! Room 6BCF

2:00 p.m. – 3:00 p.m. Pacific, “Marvel Vs. Capcom 3: Fate of Two Worlds”
The wait is over! After a decade of demand, Capcom delivers with “Marvel Vs. Capcom 3: Fate of Two Worlds”! Learn all you need to know about the characters, levels, storyline, fight moves and combos from Producer, Ryota Niitsuma and Special Advisor Seth Killian of Capcom, along with TQ Jefferson, Director of Games at Marvel Entertainment and Frank Tieri, writer for Marvel Comics. Then show off your fighting game skills as we pull audience members for some spontaneous challenge matches to win exclusive MVC3 prizes! Followed by a Q&A session. Room 24ABC

4:30 p.m. – 5:30 p.m. Pacific, “Spider-Man: Shattered Dimensions”
Four Spider-Man worlds collide at San Diego Comic-Con in Activision’s “Spider-Man: Shattered Dimensions.” For the first time, creative talent from all four Spider-Man universes featured in the game (Amazing, Noir, 2099 and a to-be-revealed universe) come together to discuss all of the aspects that go into creating a dynamic and explosive videogame experience from four unique settings. Get an insider’s look at the creative thinking and collaborative effort between comic books and videogames with Spider-Man legend Stan Lee, acclaimed Marvel writer Dan Slott (AMAZING SPIDER-MAN), familiar Spider-Man voiceover talent from the game and members from Marvel and game developer Beenox, as they dive into the rich lore of past and present Spider-Man, discuss bringing Spider-Man to life in four distinct ways and unveil new content and gameplay from the upcoming game. Room 5AB

5:45 p.m. – 6:45 p.m. Pacific, Heroic Age – The Avengers
THE HEROIC AGE IS HERE! Heeding the call, Earth’s Greatest have assembled once for the most anticipated comic’s event in a decade! With Steve Rogers back leading the charge – what kind of threats can his teams expect to face? Find out here as the creators behind your favorite Marvel heroes answer your questions and let you in on what happens next! Join Editor In Chief and CCO, Joe Quesada, Marvel’s Talent Liaison C.B. Cebulski, Brian Michael Bendis (AVENGERS), Matt Fraction (INVINCIBLE IRON MAN), Jim McCann (HAWKEYE & MOCKINGBIRD) and more as they shed some light on the HEROIC AGE! Room 6BCF
Join the liveblog here.

8:15 p.m. – 9:15 p.m. Pacific, Iron Man Anime Screening
Witness the dawn of Marvel Anime as we WORLD PREMIERE the highly anticipated, full-length, pilot episode of Iron Man! In addition to the screening, we will be featuring an exclusive first look at upcoming designs, produced by the world-renowned Japanese animation studio, Madhouse–whose notable films (to name a few) include hits such as: “Ninja Scroll” and “The Girl Who Leapt Through Time.” Room 6DE

11:15 a.m. – 12:15 p.m. Pacific, Cup O’ Joe
This is it, Mighty Marvel fans- the no-holds-barred, anything goes, full of surprises panel you wait all year for, and it’s here! Marvel’s Editor-in-Chief and CCO, Joe Quesada, takes on all questions, shocks the audience with jaw-dropping announcements, and keeps you guessing with surprise guests. You never know who will show up, but you better be here, because this is the panel that everyone will be talking about! Room 6BCF

10:00 a.m. – 11:00 a.m. Pacific, “Super Hero Squad Online”
Join The Amazing Society–aka the “Super Hero Squad Online” development team–as they discuss what it’s like to be working with Marvel Entertainment to create a family-friendly MMO that will appeal to Marvel fans old and young alike. Come along to see some amazing gameplay footage, get an exclusive first look at some unique features of “SHSO,” and get up close and personal with the developers of the first Marvel MMO for all ages! Room 7AB

10:00 a.m. – 11:00 a.m. Pacific, Sideshow Toys
The Sideshow Collectibles Design and Development Team present an in-depth look at some of Sideshow’s most popular product lines and licenses, including Star Wars, G.I. Joe, Marvel Comics, The Lord of the Rings and many more, offering insight into the design process, sneak peeks of upcoming products, a Q&A session and giveaways.
Room 32AB

11:00 a.m. – 12:00 p.m. Pacific, The Women of Marvel
One of the most talked about panels from last year is back! Forget Storm & She-Hulk; meet the real Ms. Marvels of the comic world! Join women from every discipline in the creative process at Marvel to hear what it’s like working as a woman in comics today and how you can join them. Say goodbye to the so-called “Boy’s Club,” these ladies are busting down the four-color ceiling! Guests include Marjorie Liu (BLACK WIDOW), Kathryn Immonen (HERALDS), Christina Strain (SHADOWLAND) and more! Room 7AB

12:45 p.m. – 1:45 p.m. Pacific, Spider-Man
The hunt has begun and the moment in time that everyone’s been clamoring about is almost here! How much more can everyone’s favorite web-slinger take? You’ve got questions & these people have answers! Join Dan Slott (AMAZING SPIDER-MAN), Marvel’s Talent Liaison C.B. Cebulski and AMAZING SPIDER-MAN Assistant Editor Tom Brennan as they talk about what’s on the horizon for Peter Parker and just what is Origin of the Species? There’s only one way to find out True Believers – come on over and find out! Room 6A