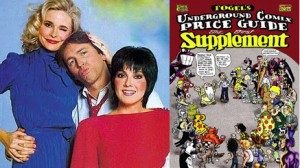 We are pleased to present our Legends of Underground Comix reunion at the show, uniting two generations of classic creators. Don’t miss this chance to meet them & get your collection signed!

Media guests include actresses Joyce Dewitt and Priscilla Barnes from the “Three’s Company” TV show, who will be signing photos and taking snapshots with attendees for a small fee, in conjunction with “My Name is Earl” actor Jim Decker Promotions. Ms. Dewitt portrayed the perky and sensible roommate Janet Wood from 1977 to 1984, and has appeared in many other TV roles and the film “Airplane 2”. Ms. Barnes portrayed nurse roommate Terri Alden from 1981 to 1984, and is also well known for her roles in the films “Mallrats” and “The Devil’s Rejects”. Ola Ray, Playboy Playmate and Michael Jackson’s girlfriend in the “Thriller” music video will also be signing. All guests are subject to cancellation due to professional commitments.