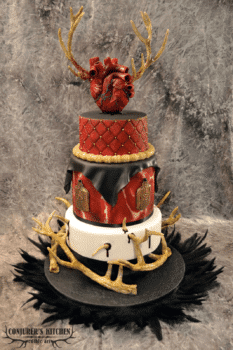 TORONTO, ON, [August 15, 2018] – Also known as “Annabel Lecter,” trained artist and taxidermist de Vetten has made a name for herself by baking a long list of disturbing desserts, all of which look revoltingly realistic. As a big fan of the Thomas Harris novels and cinematic adaptations of the Hannibal character, she is quite enamoured of the TV show. “I love how Hannibal is even more sophisticated, intelligent, and articulate than in the films,” she enthuses. “This makes him more unsettling than ever before.”

Her panel at FannibalFest 2018 will explore the connections between food and death. De Vetten hopes attendees will enjoy not only the morbid and “murdery” factoids she presents, but also her edible interpretations of some of her favorite scenes in the show.

For this year’s FannibalFest, de Vetten says she’s excited about pretty much everything, but notes that meeting Janice Poon — and getting to create edibles with her — is at the top of the list.

When asked what kind of cake she would make for Hannibal, she is quick to respond: “I think it would have to be incredibly beautiful and sophisticated looking at first glance, with some seriously disturbing elements that would only be found on closer inspection,” adding that she loves making things appear what they actually aren’t.

FannibalFest 2018 is an annual Hannibal convention held in North America for fans (“Fannibals”) of the 2013 – 2015 television series created by Bryan Fuller. The convention is managed by a non-profit group comprised of fans of the series.

MA – An Evening with Julianne Moore