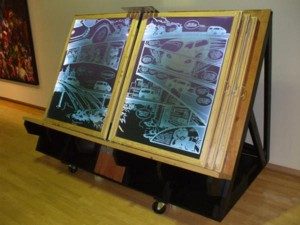 NEW YORK and COLUMBUS, Ohio, October 11, 2011 – Attendees at next weekend’s Wizard World Mid-Ohio Comic Con will have the unique opportunity to check out the “Huge Glass Comic Book,” the world’s first glass comic book, blown up and lit up on glass.  Each of its twelve pages is four feet high and three feet wide, all laser etched on quarter inch glass.  The Huge Glass Comic Book is registered for three world record claims with Guinness World Records, including first glass comic book, largest glass comic book and largest comic book.  At over 500 pounds of comic pages, it may also be the world’s heaviest comic book.

The comic is a single concise story introducing Comangra City, a place where all the world’s comic and cartoon genres live and interact with each other in a multi-cultural metropolis.  Nearly every country has its own tradition of graphic story.  It’s time these traditions meet, mix and react with each other.  Beyond the story, each page of the Huge Glass Comic Book highlights different graphic storytelling techniques in simple, reproducible ways.  It took over 550 hours to create this comic and, four weeks into its completion, it’s already attracting interest from galleries, educational institutions and even “Ripley’s Believe It or Not!  It’s a one of a kind opportunity to see a first in comics and in art.

Wade Gugino, writer and creator of the Huge Glass Comic Book, will be present to page through the comic with fans and sell print versions of the comic and graphic story layout guide, as well as individual cards, prints and T-Shirts.  This will be the very first public run of the print comic — a limited edition sold out at ArtPrize 2011 in two weeks.

Mid-Ohio Comic Con is the eighth stop on Wizard World’s 2011 North American tour.  Hours are Saturday, October 22, 10 a.m. – 7 p.m.; and Sunday, October 23, 10 a.m. – 5 p.m.  Tickets are available in advance online at http://www.wizardworld.com/midohio.html at a savings over tickets purchased at the door.  Advance adult single-day tickets are priced at $25 ($35 on site); weekend all-session tickets are $40 ($50 on site), and tickets are free for children age 10 and under when accompanied by a paid adult (limit two children per adult).  VIP packages with special entry and exclusive items are also available on a limited basis.