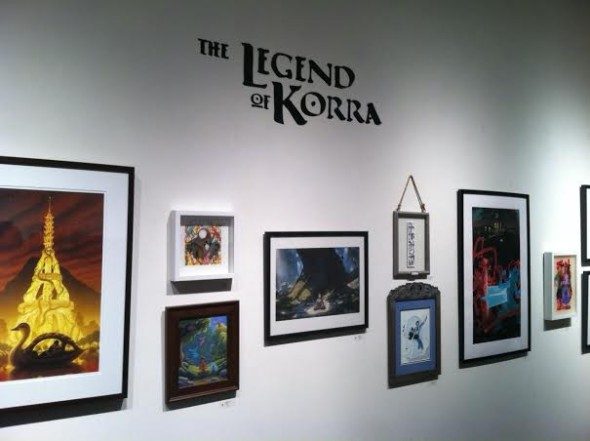 Last Saturday night Gallery Nucleus opened a tribute exhibition of art to the Nickelodeon show Avatar: The Last Airbender and its spinoff The Legend of Korra. Hundreds of fans, many of whom cosplaying their favorite characters, waited for hours in eager anticipation with lines ultimately stretching around the building and down the block. Co-creators Bryan Konietzko and Michael DiMartino were on hand to sign autographs for a limited number of attendees. The artwork on display included both early development art and original pieces created by Avatar/Korra production artists and fans selected for inclusion.

Nucleus owner Ben Zhu, a self-avowed fan of Korra, said he got in touch with Nickelodeon around the middle of the third season to start planning the art show. “Little did we know that we would be the main event post show and no other fans events were in the works,” said Zhu in an email, “So in that sense, we got lucky.” Avatar/Korra co-creators Bryan Konietzko and Michael Dimartino remarked that they already knew of Nucleus’s reputation when they were approached because of the animation exhibitions it had hosted in the past. “It worked out nicely,” said Konietzko, “Lots of the crew from both shows are here so it’s kind of a family reunion.”

When asked about the future of 2D animation, Konietzko said the industry is currently in something of a Golden Age in television with more people going to art school specifically to study animation. Pointing to the artists represented in the exhibition, he and DiMartino agreed that they represent the future and will be the ones creating their own shows in the years to come.

During the opening only the first people in the gallery were given wristbands to get signatures from Konietzko and DiMartino. But the many attending artists from each show, including Joaquim Dos Santos, Angela Song Mueller, Colin Heck, Johane Matte, Giancarlo Volpe, Emily Tetri, Kenji Ono, Elsa Garagarza, Will Ruzicka, and more, mingled with fans and very graciously signed art books and prints. Additionally voice actors PJ Byrne (Bolin), Seychelle Gabriel (Asami),Dee Bradley Baker (Tarrlok and every single animal) and his daughter Cora (young Korra) also made appearances to meet fans and snap selfies. All told, a reported 1,500 people showed up to indulge in their fandom. Ben Zhu said, “This event broke attendance records for us and is the most attended show in our gallery’s history just above the Final Fantasy X/X2 game release event and the Harry Potter Tribute Exhibition. We knew the event was going to be big but anticipated maybe 2/3 the actual attendance.”

When asked if the story of Korra will continue in comic form as Avatar: The Last Airbender has, DiMartino remained cryptic but said if anything were to continue it would be there. He spoke well of the creative team behind the Dark Horse title, writer Gene Luen Yang and artist team Gurihiru, saying they are so talented they need very little direction.

The artwork for the exhibition will remain on display till March 22. The closing event on Saturday March 21st will feature a Q&A panel with Konietzko and DiMartino but is most likely to be restricted to 100-150 people. Fans are encouraged to follow Gallery Nucleus on their Facebook page and Twitter to get the latest news.