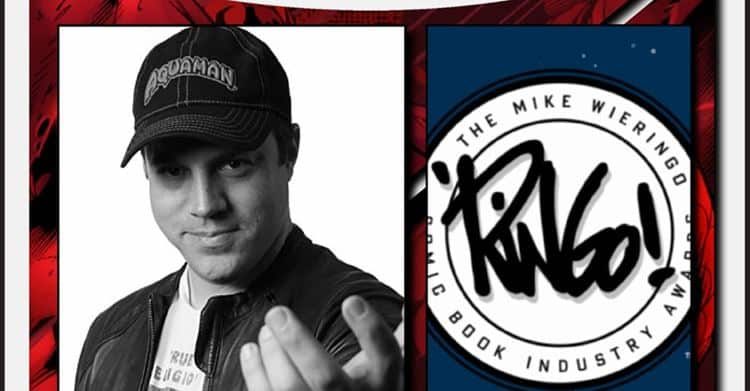 The 2020 Mike Wieringo Comic Book Industry Awards will be presented at the Ringo Awards Ceremony in conjunction with Baltimore Comic-Con Live on the evening of Saturday, October 24, 2020. This year, the event is open to pros and fans alike to virtually attend the Award Ceremony and spend a fun evening with the comic book professional community. We recommend ordering crab cakes for your takeout dinner that evening.

Film and comics legend, Kevin Smith will open the show and introduce his friend, Geoff, as the keynote speaker.

Geoff Johns is an award-winning comic book writer and screenwriter.

After graduating Michigan State University, Geoff moved to Los Angeles and began assisting legendary Superman director Richard Donner. While filming on set in New York, Geoff started his comic book career with Stars and S.T.R.I.P.E. for DC Comics. A New York Times best-selling author, Geoff has written some of the most recognized and highly-acclaimed superhero stories of the modern era, the most recent being the critically-acclaimed Watchmen sequel entitled Doomsday Clock with longtime collaborator, illustrator Gary Frank.

Under his Mad Ghost Productions banner, Geoff currently serves as an Executive Producer and Showrunner on Warner Bros. Television series Stargirl, which he created for The CW, among other various film and television projects.

Geoff was proudly born in Detroit. He currently resides in Los Angeles.

“Both Geoff and Kevin have attended the Baltimore Comic-Con in the past, so this is a great fit for the virtual convention,” said Marc Nathan, Baltimore Comic-Con promoter. “Also, both knew Mike Wieringo and have some special memories that I, personally, can’t wait to hear.”