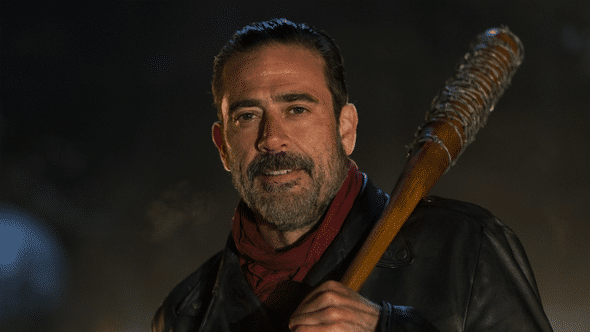 The cast and producers of AMC’s hit scripted series “The Walking Dead,” “Fear the Walking Dead” and “Preacher” and upcoming late-night talk show “Geeking Out” will descend on this year’s Comic-Con in San Diego, CA.

In addition to official series panels, AMC will host fan activations throughout the weekend, including a “The Walking Dead”-themed booth (#4237) in the Convention Center, where fans can stop by to take photos of themselves among Negan’s (Jeffrey Dean Morgan) infamous “lineup” from the season six finale, as well as a “Fear the Walking Dead” yacht, at the Fifth Avenue Pier behind the Convention Center, where fans can experience life aboard the Abigail.

In addition, Kevin Smith’s annual Comic Con panel will include a sneak peek of “Geeking Out” and a compilation of Kevin’s favorite scenes from season five of “Comic Book Men.”

About “The Walking Dead”

Based on the comic book series written by Robert Kirkman and published by Image Comics, “The Walking Dead” reigns as television’s most watched drama for Adults 18-49. “The Walking Dead” tells the story of the months and years that follow after a zombie apocalypse, and follows a group of survivors, led by police officer Rick Grimes, who travel in search of a safe and secure home. The series is executive produced by showrunner Scott M. Gimple, Robert Kirkman, Gale Anne Hurd, David Alpert, Greg Nicotero and Tom Luse.

About “Fear the Walking Dead”

As “Fear The Walking Dead” embarks on the second half of season two, the Clark, Manawa and Salazar families fracture. The events that took place at the Abigail compound have set all of our heroes adrift. Now they must forge their own paths to survive. “Fear the Walking Dead” is executive produced by showrunner Dave Erickson, Robert Kirkman, Gale Anne Hurd, Greg Nicotero and David Alpert and stars Kim Dickens as Madison, Cliff Curtis as Travis, Frank Dillane as Nick, Alycia Debnam-Carey as Alicia, Ruben Blades as Daniel, Mercedes Mason as Ofelia, Lorenzo James Henrie as Chris, Colman Domingo as Strand and Danay Garcia as Luciana.

Based on the popular cult comic book franchise of the same name, “Preacher” is a supernatural, twisted and darkly comedic drama that follows a Texas preacher named Jesse Custer, who is inhabited by a mysterious entity that causes him to develop a highly unusual power: the ability to make people do his bidding with just a word. Once this power attracts the attention of two mysterious angels (Fiore and DeBlanc), Jesse, his badass ex-girlfriend Tulip, and an Irish vampire named Cassidy are thrust into a crazy world populated by a cast of characters from Heaven, Hell and everywhere in between. The Sony Pictures Television and AMC Studios co-production was developed for television by Seth Rogen & Evan Goldberg (“This Is the End,” “Superbad,” “Neighbors”) and showrunner Sam Catlin (“Breaking Bad”).

About AMC
AMC is home to some of the most popular and acclaimed programs on television. AMC was the first basic cable network to ever win the Emmy(r) Award for Outstanding Drama Series with “Mad Men” in 2008, which then went on to win the coveted award four years in a row, before “Breaking Bad” won it in 2013 and 2014. The network’s series “The Walking Dead” is the highest-rated series in cable history and the number one show on television among adults 18-49 for the last four years. AMC’s other current original drama series include “Better Call Saul,” “Hell on Wheels,” “Turn: Washington’s Spies,” “Halt and Catch Fire,” “Humans,” “Fear the Walking Dead,” “Into the Badlands” and the forthcoming “The Night Manager,” “Feed the Beast,” “Preacher,” “The Son” and “The Terror.” AMC also explores authentic worlds and discussion with original shows like “Talking Dead,” “The Making of The Mob,” “Comic Book Men” and the upcoming “Ride with Norman Reedus” and “The American West.” AMC is owned and operated by AMC Networks Inc. and its sister networks include IFC, SundanceTV, BBC America and WE tv. AMC is available across all platforms, including on-air, online, on demand and mobile.