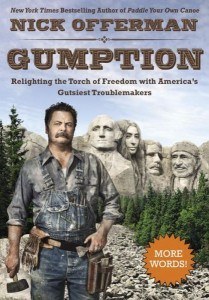 WORD Bookstore has teamed up with our friends over at Loew’s Jersey Theatre for an unforgettable night of hold-your-stomach laughter. On Tuesday, April 5th at 8:00 PM, take a trip through American history as Nick Offerman (Parks & Recreation, Axe Cop) reads from his hilarious essay collection, Gumption, on the twenty-one great American personages that inspire him. And what could be a more perfect setting for this than the lavish late-20s splendor of The Landmark Loew’s Jersey Theatre?

Offerman will then be joined in conversation by acclaimed actor Patrick Wilson (Watchmen, Batman v Superman), who starred alongside Offerman on the second season of Fargo.

A $20 ticket gets entry to the funniest event you will ever attend ever + a copy of the paperback edition of Gumption. GET YOUR TICKETS NOW ONLINE or IN-STORES.