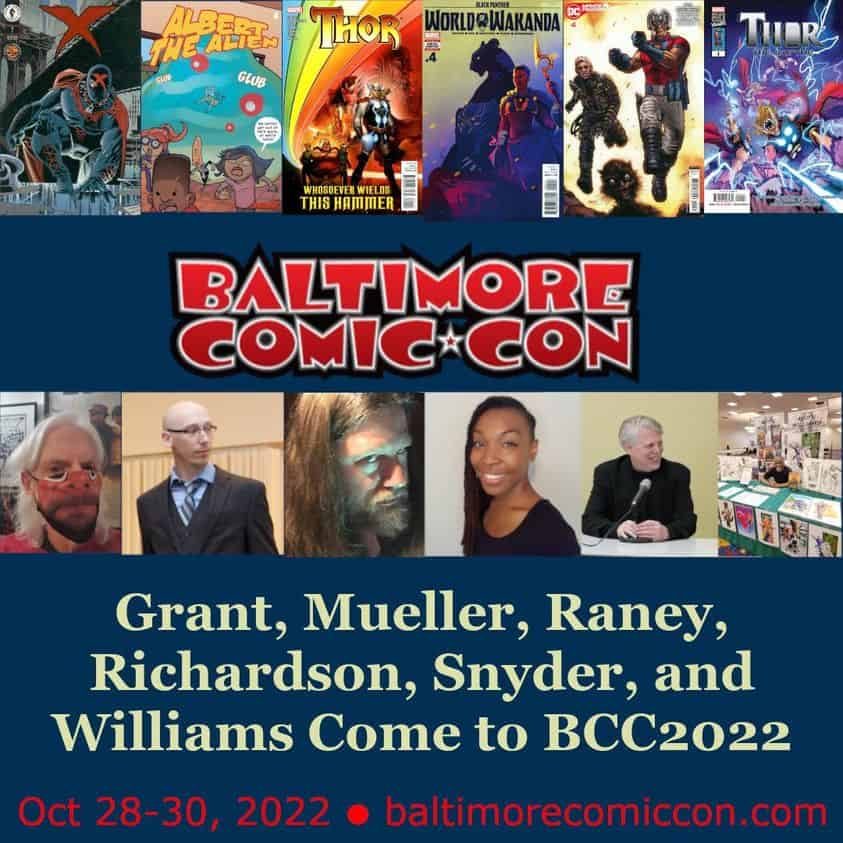 Writer Steven Grant is a longtime fixture of comics, debuting at Marvel in 1978 but gaining notoriety several years later with The Punisher Mini-Series. He has written numerous characters for numerous publishers, including Spider-Man, The Avengers, Batman, Superman, Grifter, Mickey Mouse, American Flagg!, Vampirella, Stone Cold Steve Austin, GI Joe, Masters Of The Universe, and many, many others. His own creations include Whisper at Capital, revamps of Manhunter and Challengers of The Unknown at DC, Enemy at Dark Horse, Edge (with Gil Kane) at Malibu/Bravura, and 2 Guns at BOOM! Studios, which became a Universal film starring Denzel Washington and Mark Wahlberg. He created the pivotal crime comic Badlands for Vortex Comics, and partnered with Mike Zeck on the Epic graphic novel Punisher: Return To Big Nothing and their original crime mini-series Damned at Jim Lee’s Homage. He has also written film criticism, music reviews, novels, short stories, the long-running online column Permanent Damage, and is executive producing media projects based on his creations. He currently lives in the desert somewhere outside Las Vegas.

Trevor Mueller is a comic writer from Chicago. His latest project is the Webtoon Original series, Nexus Point, premiering in 2022. He has also written the multi-Harvey Award nominated Albert the Alien. He has contributed stories to several anthologies, including Reading With Pictures (Andrews McMeel), Killer Queen and What Fresh Hell Is This (Red Stylo Media), Best of Omega Comics Presents (Pop! Goes the Icon), and Aw Yeah Comics. He has also self-published several other works including Consumer, Beyond the Pillars, and The Witches of E Wick Blvd. Trevor also appears on occasional episodes of the popular web series Nostalgia Critic. Trevor currently lives in Chicago with his family; his cat, Waffles, might be planning for world domination.

Tom Raney has spent much of his career working for the mid- to large-size publishers in the comics industry. He has contributed to Marvel’s Ultimate Universe, Valiant’s relaunched titles, and Dark Horse Comics’ Star Wars among many other titles and publishers. In recent history, his artwork can be seen within the pages of DC Comics’ Threshold, Marvel’s Incredible Hulk, and Titan Comics’ Monster Massacre hardcover collection.

Afua Richardson (pronounced “ah-FOO-wah”) is an award-winning American comic book illustrator best known for her work on Marvel’s Black Panther: World of Wakanda. Some of her other works include The Wild Storm, Attack on Titan, X-Men ’92, Captain Marvel, and All-Star Batman to name a few. Afua is also a musician, voice actor, activist, and mentor. As a recipient of the Nina Simone award, she is aptly called a Jane of All trades.

John K. Snyder III is the creator of the groundbreaking 1980’s series, Fashion In Action. John’s latest work is a graphic novel adaptation of world-renowned writer Lawrence Block’s detective noir classic novel, Eight Million Ways to Die, published by IDW. He has worked for nearly every major publisher, including DC, Dark Horse, Marvel, IDW, and many others. Snyder worked on Suicide Squad during its classic 1980’s run with writers John Ostrander and Kim Yale, and provided covers for the 2007 Suicide Squad mini-series. Along with Matt Wagner, Snyder co-created the Pieter Cross version of Doctor Mid-Nite for DC and Lady Zorro for Dynamite. Snyder also worked with Wagner on the epic Grendel: God and the Devil storyline. He has also provided numerous covers for a wide range of titles, including Harlan Ellison’s Phoenix Without Ashes (IDW). Fashion In Action has been recently collected by Hope Nicholson’s Bedside Press. His other 1980’s creator-owned series (along with co-creators Timothy Truman and Michael H. Price), Leo Kragg: The Prowler, is also available in a two-volume set from Cremo Press. John encourages all artists, young and old, to actively pursue their own creator-owned aspirations.

Keith Williams, comic book inker, enrolled in the School of Visual Arts in New York City from 1976 to 1980. Keith received his Bachelor of Fine Art in Media Arts and studied under Will Eisner, the creator of The Spirit comic strip. With the help of Marvel comic book artist and mentor Don Perlin, Keith started working for Marvel Comics in 1982 as a background inker. He worked for inkers including Joe Sinnott and Mike Esposito. At Marvel, he became the first John Romita Raider, an art correction group. Keith later became an assistant editor under Jim Owlsley (Christopher Priest) on the Spider-Man group of books. The two became the first all-black editorial team in Marvel’s history. He later became John Byrne’s background artist on Alpha Flight, The Hulk, Superman, and Action Comics. Keith began inking regularly on Web of Spider-Man, which lasted for four years. In between that time and after, he worked on many other books at Marvel, including Silver Surfer, She-Hulk with John Byrne, Warlock, Quasar with Greg Capullo, Star Trek, and the X-Men. At Dark Horse Comics, he worked on The Mask and Walter with artist Doug Mahnke, and Star Wars Droids. At DC Comics, he was on Superman, and the Lobo/Mask graphic novel with Doug Mahnke. For Valiant, he worked on Quantum and Woody and the covers of X-O Manowar. At Moonstone Comics, he was on The Kolchak Night Stalker Chronicles, Buckaroo Banzai, and Domino Lady. For ten years, he had worked on The Phantom for King Features Syndicate. And at Avatar Press, he inked Lady Death and Crossed covers, a Crossed webisode comic, “Wish You Were Here”, and the cover and interiors of the comic book Uber. He has also inked Avatar Press’ published graphic novel Max Brooks’ Harlem Hellfighters. And recently, he has inked over Ron Frenz pencils for Marvel’s Thor the Worthy one-shot book.

“We bring in such a great variety of comics creators,” said Marc Nathan, show promoter for the Baltimore Comic-Con. “This group is an amazing cross-section of the industry with years of experience working on brand name titles at bigger publishers, indie titles with award accolades, and everything in between. Fans will be weighted down with books galore to get signed!”